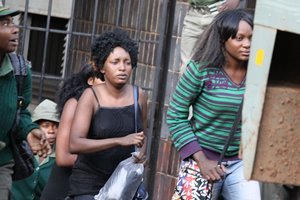 Sisters Sophie (26) and Netsai Nhokwara (24) and Rosemary Chakwizira (28) are the first suspects to be arrested in connection with sex attacks on men since such cases were first reported two years ago. They were jointly charged with Thulani Ngwenya (24).

Their 17 victims identified so far include a soldier and a policeman whom they allegedly abused without using condoms. The four were not formally charged with 17 counts of aggravated indecent assault when they appeared before Harare magistrate Mr Kudakwashe Jarabini.

The suspects stood in the dock wearing long faces as the prosecutor read the charges to them for almost an hour. After the charges were put to the suspects, Mr Jarabini remanded them in custody to October 28. They were advised to apply for bail at the High Court.

On the first count, it is alleged that on March 3 this year at around 7:50am, the four, who were driving a Toyota Spacio without registration numbers, picked a 19-year-old man in Budiriro, Harare. The teenager was on his way to town. Along the way, the State says they sprayed him with chemicals and he felt dizzy.

It is alleged they diverted the route and drove into a bushy area along Mukuvisi River behind Houghton Park where they forced him to drink a concoction, which stimulates sexual desire. They then allegedly forced the teenager to be intimate with the three of them using condoms.

After this, they secured the used condoms containing semen before spraying him with the same substance and leaving him unconscious. When he woke up, the teenager reported the matter to police. On August 22, the four allegedly picked up a soldier in Norton while driving a Toyota Raum.

The soldier, who was not in uniform, was taken into a dust road near Porta Farm. One of them, it is alleged, produced a pistol and threatened to shoot him if he refused to have unprotected sex with them. They dumped him in the bushy area and sped off.

On September 14 at about 5:20pm, the four who were driving a Mitsubishi Chariot along Chitambo Street in Chinhoyi approached a police Constable who was not in uniform. They allegedly asked him for directions before bundling him into their vehicle after spraying him with an unknown substance.

They allegedly forced him to have unprotected sex with them before pushing him out of the vehicle and speeding off. The policeman reported the matter at Chamagamba Police Station. It is alleged that using different cars, the gang terrorised 14 other men using the same tactics.

Jonathan Moyo is ‘worse than the Taliban’