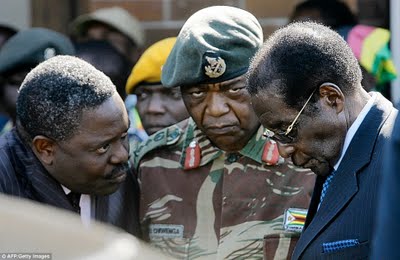 SW Radio Africa has published a list on our website containing countrywide addresses of over 76 offices and buildings from which the notorious Central Intelligence Organisation (CIO) work. The 2008 list includes telephone and extension numbers.

The justification for the exposure is that some of the buildings have been used to interrogate and torture abducted opposition activists. Hundreds of perceived ZANU PF opponents have been and continue to be abducted by CIO agents and taken to these offices to be tortured. In coming weeks we will continue to highlight the abuses that have been committed in some of these places.

In July SW Radio Africa published a list from 2001, exposing by name some 480 CIO agents working in and outside Zimbabwe. This newer document, dated 2008, contains around 759 telephone extensions and 76 different offices and buildings. We believe the number of telephone extensions shows that the organisation has grown in size over the years.

In Marondera is Hurudza House which is found in First Street. SW Radio Africa reported how MDC-T District Chairman Bakayimana and a youth organizer called Kainos were abducted on the 22nd May 2008 and taken to this building. These and other abductions were conducted by the CIO and other state security agencies in the run up to the June 2008 one-man presidential election runoff.

Last year a remorseful ZANU PF militant confessed publicly at a bus terminus: “We tortured them at Hurudza House for weeks, before taking them to various secret locations. We wanted to use them as bait to lure Ian Kay (local MP) and Farai Nyandoro (local Mayor) to our killing grounds.”

Dressed in ZANU PF regalia the woman known as Chikanya also claimed she and CIO Deputy Intelligence Officer Farai Machekanyanga led a gang in the town that assassinated suspected MDC-T supporters and dumped their dead bodies in shallow graves and dams.

Chakanya added: “We even forced the captives to make distress phone calls for help from Kay and Nyandoro. When the plot failed, we had no option but to assassinate them and dump their corpses in Wenimbe dam. This is a ZANU PF tried and tested solution for dealing with betrayers, dating back to the liberation struggle,” she said. Chakanya was later also found dead in the Wenimbe dam.

On 67 Tenth Avenue in the Bulawayo City Centre is Magnet House. The rightful owner of the building is the Zimbabwe African People’s Union (ZAPU) and its former military wing ZIPRA but the Mugabe regime seized this and other properties during a crack down against the late Joshua Nkomo and his party. Magnet House for years has been used as the Bulawayo headquarters of the CIO.

Four ZANU PF youths were in 2004 abducted by CIO agents and taken to Magnet House for allegedly supporting a ZANU PF faction opposed to notorious war vets leader Jabulani Sibanda. The youths approached the late Vice President Joseph Msika at his home and narrated their torture ordeal. They removed their clothes to reveal serious injuries to their private parts and bruises over their bodies.

In March 2009 SW Radio Africa reported how a man was thrown out of the 4th floor of Magnet House, at lunchtime. Huge crowds of shoppers converged on the scene as the man, identified as bank clerk Tawengwa Mavhunga, lay motionless on the road, covered by a red blanket. A Bulawayo City Council vehicle rushed the seriously injured clerk to the United Bulawayo Hospital.

The state owned Chronicle newspaper claimed Mavhunga lied to his mother that he had been abducted by the CIO when in fact he had slept at a girlfriend’s house. Our sources however said he was abducted after a clash with CIO officers making ‘dubious’ withdrawals from the bank where he worked. Mavhunga is thought to have asked too many questions about the transactions and become a target.

Curiously CIO agents are deployed at the Scientific and Industrial Research and Development Centre (SIRDC) in Harare on Alpes Road, Hatcliffe. Our list shows 39 telephone extensions suggesting a large number of agents are probably deployed there. The SIRDC mission statement says the organisation is there “to provide Zimbabwe and the region with technological solutions for sustainable development.”

The strangest deployment has to be in Harare at the Furniture Discount Centre. A single phone number is listed there, begging the question, what would be of interest to the CIO at such a location.

The most notorious torture centre used by the CIO is found in Goromonzi and is conspicuously absent from the list. SW Radio Africa understands it’s a prison complex at Goromonzi Police Camp, 40 km east of Harare. Evidence from the testimony of abducted former ZBC TV news presenter Jestina Mukoko suggests that she might have been taken there.

In December 2008 Mukoko was abducted in the early hours of the morning by six men and a woman who did not identify themselves. In her testimony she said they forced her into a Mazda Familia vehicle and ordered her to lie low on the seat of the car.

“Immediately a woollen jersey was put across my face, covering my eyes, nose and mouth (and) as a result I had problems breathing and almost suffocated,” Mukoko said. Once at the torture base Mukoko said they put her in solitary confinement for 19 days while trying to force her to admit recruiting youths for military training in Botswana to dislodge Robert Mugabe from power.

“Firstly I was assaulted underneath my feet with a rubber-like object which was at least one metre long and flexible, while seated on the floor. Later I was told to raise my feet onto a table and the other people in the room started to assault me underneath my feet. This assault lasted for at least five to six minutes. They took a break and then continued again with the beatings,” she said.

The Goromonzi torture base is so infamous that even a report on torture compiled by the Crisis in Zimbabwe coalition was titled ‘Cries from Goromonzi – Inside Zimbabwe’s Torture Chambers’.  The report contained 23 harrowing testimonies from individuals tortured between 2000 and 2009.

The Crisis Coalition said their report exposed the “pervasive use of torture and imprisonment of citizens in secret detention camps in Zimbabwe to extract information, stifle public dissent and determine political processes and electoral outcomes.’

SW Radio Africa believes the list of offices and buildings it has published might help shed some light on where some of these abuses are committed and remove some of the fear that this secretive organisation has created in the minds of all Zimbabweans. CIO list of offices 2008