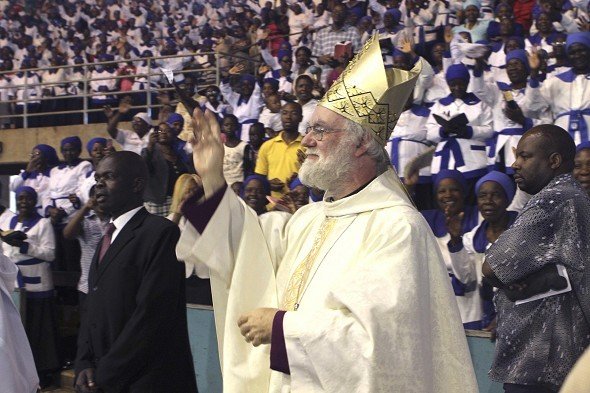 HARARE – Visiting Archbishop of Canterbury Rowan Williams was yesterday verbally harassed and barred from attending a church service in Mutare and Penhalonga by thugs believed to have been hired by the excommunicated Bishop Nolbert Kunonga. He later told Robert Mugabe to stop the madness and violence.

The highest authority in the Anglican Church worldwide met with Mugabe after having been denied entry into St John’s Cathedral in Mutare and St Augustine’s Mission in Penhalonga earlier in the day by hired kongonya dancing law breakers.

The Anglican boss saw for himself the lawlessness surrounding his churches in Zimbabwe. Kunonga is a Zanu PF functionary who has been at the helm of destabilising the Anglican Church throughout the country.

UK’s Rwanda asylum plan the ‘opposite of nature…

Williams, who leaves for Zambia today, was in the country at the invitation of the Anglican Province of Central Africa (CPCA) where he tackled Mugabe over the issue of murder, violence, intimidation, education, health, relief and development programmes which were being compromised by Kunonga’s interference.

“On 18th of February 2011, Mrs Jessica Mandeya of Harare Diocese was murdered and her body was not discovered for two days until Sunday morning when friends came to join her to walk to the church.

“We have information which very strongly suggests that she was murdered because she belongs to the diocese of Harare CPCA. She had received threats to that effect in preceding weeks and days as she consistently refused to join Dr Kunonga’s church,” reads part of a dossier presented to Mugabe at State House yesterday.

The visiting Archbishop, who drove into the country via Mozambique on Sunday, came face to face with Kunonga’s brutality when placard wielding Kunonga followers barred him from entering the two churches in Mutare and Penhalonga to pray. Williams was denied entry into the school church to hold prayers and had to worship in the small nun prayer-house nearby.

Kunonga’s supporters were waving and singing and denouncing Williams’ visit accusing him of supporting homosexuals.

Some of the members who blocked the entry into the church in Mutare had placards written which read: “Manicaland says no to homosexuality; Homosexuality is evil; Sodom and Gomora were destroyed because of homosexuality; Gandiya, Bakare, Makoni how do you invite homosexuality in our soil.”

“You can enjoy your money though ill-gotten from acts of homosexuality. We are not with you and will never be with you. Homosexuality is unwelcome in the church and the Bible states as such,” shouted one angry parishioner who was in church uniform as the Archbishop walked past.

Makoni (Julius) is the Bishop for the CPCA Manicaland Diocese, while Bakare is a retired Bishop and Gandiya (Chad) is a bishop of the Harare Diocese. Williams, however believes that the homosexuality card is being overplayed and is being used to cover up real issues.

“The issue of homosexuality is a distracting tactic aimed at covering up the real issues. The church does not allow same sex unions and the allegations are entirely fictitious,” Williams told journalists at a press conference after his meeting with Mugabe.

The bishop was accompanied by Archibshops Albert Chama, Primate of the province of Central Africa and Bishops Chad Gandiya of the Harare Diocese, Godfrey Tawonezvi of Masvingo, Julius Makoni of Manicaland, Cleopas Lunga of Matabeleland, Ishmael Mukuwanda, Central Zimbabwe and Trevor Mwamba of Botswana.

The clergymen told Mugabe they were concerned about unfair arrests of priests and deacons and continued violence and intimidation of innocent parishioners at their places of worship. Mugabe heard how men of the cloth were threatened with violence by armed men adding on that bishops even received death threats by phone and in person at gun point.

“It is a matter of the greatest sadness that we are being prevented from continuing our work to support local and often very needy communities with healthcare and education. Our priests and people are being denied access to our own clinics and schools. Many of these institutions have been taken from us and under current poor or corrupt management, are being rapidly run to the ground and stripped of their assets,” the bishops told Mugabe.

Kunonga, a Mugabe ally who was excommunicated by the CPCA over misconduct, has since taken over 90 properties of the church since 2008, forcing parishioners to find alternative places of worship. Recently, the disgraced bishop had care-givers at Shearly Cripps orphanage in Chikwaka evicted from the orphanage leaving children vulnerable.

Kunonga, who openly supports Zanu PF, has also taken over 19 primary schools claiming that all the Anglican Church property belonged to him. He even told journalists recently that the Anglican Church was in fact his throne. Williams, who described his meeting with Mugabe as candid, said the Zimbabwean leader was not fully apprised of the situation on the ground.

“The president expressed concern over the damage and said he would speak to Kunonga. The meeting was peaceable, it was worth coming and it was worth meeting the president,” Williams said. The bishops also took a swipe at the police in Harare who disrupted church services at Kunonga’s instructions.

“In Harare, police have disrupted church services and have been using tear gas and baton sticks to drive people out of church buildings.” Daily News

UK’s Rwanda asylum plan the ‘opposite of nature of God’ –…