Attack by Kunonga ‘mindless and Godless’

HARARE – Archibishop of Canterbury Rowan Williams has described the attack on Church of the Province of Central Africa (CPCA) parishioners by the disgraced Bishop Nolbert Kunonga faction and Zanu PF as “mindless and Godless.” 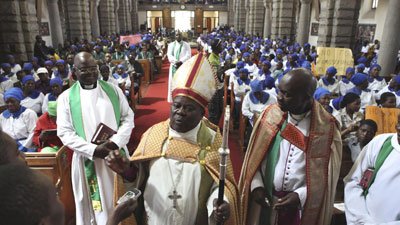 Williams, who is in Harare for a courtesy visit, told congregants gathered at the City Sports Centre yesterday not to worry about the taking over of church properties saying: “It is not the buildings that make the church but the spiritual foundation of your faith.”

Kunonga, a Mugabe ally who has since been excommunicated by the CPCA has taken control of over 90 properties of the church since 2008 forcing parishioners to find alternative places of worship.

Kunonga, who has been fingered in several incidences of violence against clergymen, has also taken over 19 primary and secondary schools. About 100 orphans were left vulnerable after their care-givers were evicted from Shearly Cripps orphanage in Chikwaka recently.

The Archbishop of Canterbury, who is the highest authority in the Anglican Church worldwide, told congregants not to be worried of the enemy’s tribulations as they are based on lies. He urged them to remain firm on their faith in the face of adversity. “Day by day you’re faced with an enemy driven by self-enrichment and lies… We thank God for your patience,” he said.

“You know very well, dear brothers and sisters, what it means to have doors locked in your faces by those who claim the name of Christians and Anglicans. You know how those who by their greed and violence have refused the grace of God try to silence your worship and frustrate your witness in the churches and schools and hospitals of this country.

“But you also know what Jesus’ parable teaches us so powerfully — that the will of God to invite people to his feast is so strong that it can triumph even over these mindless and Godless assaults,” said Williams.

The persecuted CPCA has since adopted a verse in the Bible; MuKristu usanete namata urinde (do not be weary watch and pray) to strengthen them as their theme verse and song. The worshippers, who had come in their thousands, sang and danced to the verse while they awaited the arrival of the Archbishop whom they hope will deliver them out of their misery.

However, Williams came to them with words of peace urging members of CPCA not to engage themselves in acts of violence. The Archbishop also took the opportunity to comfort survivors of violence perpetrated by Kunonga.

“I urge all people to say no to violence even as the election approaches. The word we should live is, we do not want to live in fear and intimidation,” Williams said. The Canterbury Archbishop urged the congregants to stand up to their leaders and tell them to adhere to the word of God.

The City Sports Centre was filled to capacity by people from various provinces and Dioceses across the country who had come together to hear the word from Williams. Bishops from Botswana, South Africa, England and across Zimbabwe also graced the service. Even members from Kunonga’s faction of the Anglican Church attended the sermon.

Meanwhile Kunonga, who has since formed his own church Anglican Church in Zimbabwe, spent several hours meant for prayer and worship assuring his congregants that Williams’ visit will not make any difference on the current Anglican battle.

Kunonga held a press conference at the Anglican Cathedral where he attacked CPCA and its Bishop Chad Gandiya and other Bishops. The sharp-tongued Kunonga, who openly supports Zanu PF, also took a swipe at Williams’ visit saying it was irrelevant to him.

“Williams coming will not make the CPCA get in the church buildings, look we are here in the Cathedral and they are meeting at the Sports Centre. I am the owner of this (ndini muridzi wazvo).” Kunonga boasted to his members.

“Gandiya is showing off with a white man and I do not care. This is not the end of Kunonga,” he added. He also took the opportunity to denounce gays and lesbians with his loyalists wielding placards containing messages saying “gay people deserved to die.”

Kunonga reassured the parishioners that Mugabe would not interfere in the Anglican battle. Kunonga said: “I am not meeting Williams, he is confused. He should repent first. He is an envoy and so should meet with President Mugabe not me.”

Kunonga said Zanu PF is not involved or benefiting from the take-over of church buildings saying it is the creation of the international community to involve politics in the squabbles. Daily News