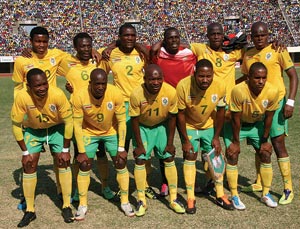 HARARE – A cloud of suspicion continues to hover over tomorrow’s African Nations Cup qualifier between Liberia and Mali, which has a bearing on Zimbabwe’s quest to qualify for next year’s finals in Equatorial Guinea and Gabon. The Liberia media this week exposed a plot by some corrupt elements in the Mali camp to bribe the Liberian team to affect the outcome of their match.

Mali will qualify from Group A if they beat Liberia, regardless of Zimbabwe’s result against Cape Verde in Praia on the same day. This week, Zifa wrote to Fifa president Sepp Blatter and the Confederation of African Football (Caf) alerting the world governing body of the match-fixing suspicions.

“We are going to play under protest because that result (between Liberia and Mali) is as good as known. Our team is asking for fairness,” Zifa chief executive Jonathan Mashingaidze told the Daily News yesterday.

“What is even more worrying is that one of Wilson Raj Perumal’s runners is a Malian,” said Mashingaidze in reference to Mali-born Gaye Alassane, who has been accused of fixing games in Central America in cahoots with the jailed Perumal.

Alassane, who was featured in our sister paper the Daily News on Sunday this week, works for a company called Executive Sports, which was formed by his jailed friend Raj Perumal. Last year, Alassane was seen in the company of Zimbabwean players and officials before the Warriors’ pre-World Cup friendly match with Japan in George, South Africa, which is believed to have been fixed.

In a move that raises further eyebrows, the Liberians wrote to Caf last week requesting their match to be brought forward to today because Mali was observing Ramadan. Liberia is a Christian country. Meanwhile, a win against Cape Verde tomorrow in Praia might not be good enough for Zimbabwe to secure qualification.

This is the sad reality the entire nation has to live with going into tomorrow’s crucial qualifier against the Indian Ocean islanders. With only one team getting automatic qualification from Group A, Zimbabwe will need results elsewhere to go their way if they are to be part of the proceedings in Gabon and Equatorial Guinea next year.

Mali currently lead the group with nine points and travel to Monrovia to face bottom team Liberia, who are already out of contention for qualification. If Mali win in Monrovia, they will win the group with an unassailable 12 points. Zimbabwe, who are on eight points, can only finish with a maximum of 11 points.

There is also no guarantee that Cape Verde will be an easy opponent for the Warriors tomorrow owing to their excellent home record during these qualifiers. The Blue Sharks have won their two matches at home in the campaign. Two teams will seal their passage by being the best runners-up in the qualification stage and a win for Zimbabwe over Cape Verde on Saturday, coupled by a few likely results going their way elsewhere, they could be one of those two sides.

Meanwhile, the Zimbabwe National Soccer Supporters Association (ZNSSA) was still running around yesterday to send their members for the Warriors’ 2012 Afcon qualifier away to Cape Verde tomorrow. The supporters body is looking for $310 000 to charter a plane that will carry at least 200 people, said ZNSSA vice-president Paddington Japajapa.

If everything goes according to plan, the ZNSS leadership is hoping to take 200 fans to Praia. Daily News