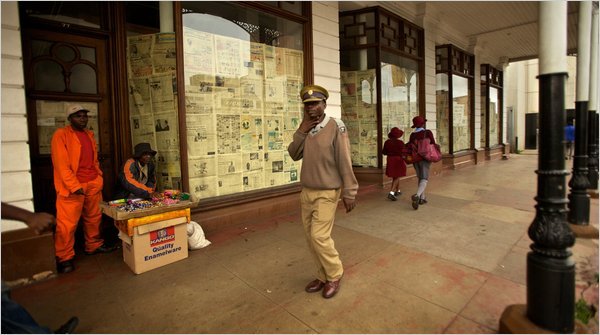 CIO torture addresses to be exposed

Starting next week Thursday SW Radio Africa will once again be exposing some of the operations of the notorious Central Intelligence Organisation (CIO). We have received a full list of the addresses and phone numbers for every single CIO office and building in the country. Some of the buildings have been used to interrogate and torture abducted opposition activists.

In July this year SW Radio Africa exclusively published a list that exposed by name CIO agents working in and outside Zimbabwe. The document was dated 2001 and listed ‘operatives’ working for the organisation at the time. For 6 weeks we serialised over 480 names of agents, some of whom were involved in gross human rights violations including abductions, torture, rape and murder.

This newer document, dated 2008, contains around 759 telephone extensions and 76 different offices and buildings from which the notorious spy agency works. Not only does the CIO have a presence in all the major cities but it has offices in smaller towns and remote areas like Rutenga, Nyika, Mt Darwin, Mataga, Makuti, Lupane, Jerera, Kezi, Chivhu, Guruve, Esigodini, Chirundu, Tsholotsho and Binga.

As our series will prove, hundreds of opposition activists have been and continue to be abducted by CIO agents and taken to these offices to be tortured. Our list will also show surprising deployments of state security agents in furniture shops and at the Scientific and Industrial Research and Development Centre (SIRDC) in Harare.

The Central Intelligence Organisation is not used to protect national security and to safeguard Zimbabweans. Along with the military and the police it is used by Robert Mugabe and ZANU PF to hold on to power, using brute force and intimidation. Experts say the CIO is the most powerful arm of ZANU PF’s security apparatus, the ‘brains behind the regime.’

A 2007 Human Rights Watch report confirmed that “police forces, agents of the Central Intelligence Organization and groups of “youth militia” are the main perpetrators of serious human rights abuses.” Civil society and opposition activists also say CIO agents and “youth militia” are often present at police stations around the country and are routinely involved in the beating of activists in custody.

Political commentator Bekithemba Mhlanga told SW Radio Africa that publication of the addresses of the offices and buildings used by the CIO would help relatives and friends of those abducted in the future. “At least they will know where to begin looking, if their loved ones are abducted.” Mhlanga also said the CIO did not protect national interests but was just a wing of ZANU PF. SW Radio Africa

Miss Zimbabwe gets US$25 000 windfall