A leaked US diplomatic cable has alleged that First Lady, Grace Mugabe is a focal point for businesspeople from Republic of South Korea (ROK) who have deals, especially in the construction industry in Zimbabwe. 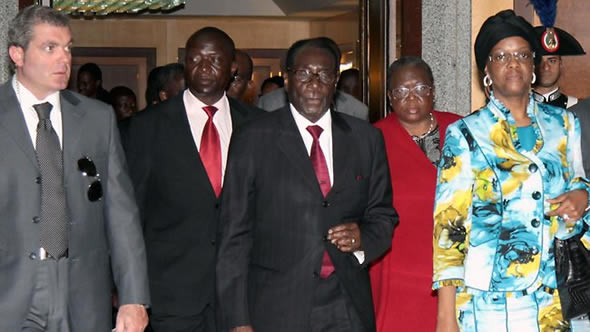 In a cable dispatch, US envoy Charles Ray, after meeting the South Korean ambassador, Jae-Hack Oh two years ago, said a number of South Korean businesses based in South Africa were engaged in construction projects with the First Lady.

He said the South Korean community, of about 200, was heavily involved in the economy “and works closely with Zanu PF officials, especially Grace Mugabe, the wife of the president”.

“South Korean construction firms, many based in South Africa, are extensively involved in construction projects with Grace Mugabe, wife of the president,” Ray wrote in the cable dispatched last year.

“Oh said this has included a number of apartments and shopping centre projects in addition to construction at her (Grace Mugabe) many farms. These firms seek to expand their presence in the country and are prepared to do whatever is necessary to achieve this goal.”

The extent of Grace Mugabe’s business empire is not known but recently the First Family built an expensive house in Harare’s leafy Borrowdale suburb. They have also heavily invested at Iron Mask Farm in Mazowe which they seized from a white farmer and Grace Mugabe is currently constructing an orphanage in Mazowe.

“ROK firms provide ‘gifts’ to Zanu PF officials for the privilege of doing business here,” Ray quoted the South Korean diplomat as saying. Most South Koreans invested in small businesses in Zimbabwe, like photocopying and selling wigs, though for construction they worked with Mugabe. The Asians were also involved in mining coal and gold.

Oh is reported to have said a number of South Koreans were interested in investing but Zimbabwe was dragging its feet on signing a trade treaty. Zimbabwe had also changed the original draft agreed upon by the two countries and Oh predicted that it would take years before something else was agreed on.

In the same cable dispatch Ray also reveals that businesspeople from the Asian country regularly bribe government officials so as to win tenders. Ray said that the South Koreans regularly gave “gifts”, including expensive cars, to grease the skids for business deals.

The US envoy said the Asians did not seem to be deterred by corruption in the country, though political instability had put the brakes on more investment. Zimbabwe Standard

Mugabe family to lose over 10 farms