WikiLeaks: Minister Mpofu a crook and a thief 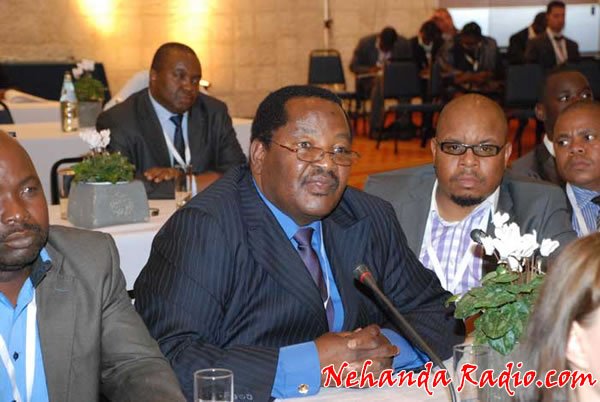 Obert Mpofu in Jerusalem for a meeting on diamonds

According to a diplomatic cable released by the whistle-blowing website WikiLeaks Chindori-Chininga told United States ambassador to Zimbabwe Charles Ray on 21 January 2010 that Mpofu had entered into unlawful partnerships with Mbada and Canadile to mine diamonds in Marange.

Chindori-Chininga was chair of the Parliamentary Committee on mines at the time and said he believed Mpofu, was a “crook” and a “thief.” He stated that MDC-T deputy minister of mines Murisi Zwizwai, who he said was a friend of his, had been seriously compromised by Mpofu.

The ambassador also met Greg Sebborn an advisor of African Consolidated Resources (ACR) who told him that Mbada was airlifting diamonds out of the country and had been stopped from auctioning 300 000 carats by Emmerson Mnangagwa who was acting Minister of Mines.

ACR was the legal owner of the Marange diamond claims at the time but this was reversed nine months later by Judge Charles Hungwe who had initially ruled in ACR’s favour.

The Full diplomatic cable is published below:

Classified By: AMBASSADOR CHARLES A. RAY FOR REASONS 1.4 (b) and (d)

1. (SBU) Pol/Econ chief spoke separately on January 21 to African Consolidated Resources (ACR) advisor Greg Sebborn and ZANU-PF chair of the Parliamentary committee on mines and energy Edward Chindori-Chininga as a follow-up to the briefing of the Fishmonger Heads of Mission (Ref) on recent developments in the Marange (Chiadzwa) diamond situation.

2. (C) With respect to the decision to halt the auction of 300,000 carats by Mbada (Ref), both Sebborn and Chindori-Chininga said the decision had been made by Emmerson Mnangagwa, who was acting Minister of Mines while the actual minister, Obert Mpofu, was on leave.

Sebborn speculated that Mnangagwa, who is notorious for having profited from Zimbabwe’s plundering of mineral resources in the Congo after Zimbabwe’s incursion in 2008, acted either because he saw the auction, in violation of GOZ procedures and the Kimberley Process action plan, as a potential embarrassment to Zimbabwe, or because he had not been getting a cut from mining profits.

3. (C) Sebborn said MDC-T, which until now has largely ignored the Marange situation, seemed to be taking an increased interest. Minister of Finance Tendai Biti called him earlier in the week to discuss Marange. An MDC-T lawyer had spent considerable time with ACR discussing its legal claims. And Prime Minister Morgan Tsvangirai and the MDC-T lawyer were planning to meet with Mnangagwa.

4. (C) Sebborn overflew the mining site recently and provided us photos of an airstrip with control tower that is being built. The airstrip is approximately 60 meters wide and two kilometers long–adequate for a C130 transport-size plane.

According to Sebborn, Mbada is currently airlifting diamonds from the site on a daily basis by helicopter which is more than sufficient for diamonds. Equipment can be brought in easily by road. Sebborn speculated that the strip could be used to bring arms into Zimbabwe. Another photo showed a military base in close proximity to the Mbada operation.

5. (C) Chindori-Chininga said his committee had begun hearings on Marange last year and received testimony from the Ministry of Mines permanent secretary. The hearings will resume when Parliament reconvenes and he expected to eventually call Mpofu to testify.

Chindori-Chininga said he believed Mpofu, whom he characterized as a “crook” and a “thief,” had unlawfully entered into partnerships with Mbada and Canadile. He stated that MDC-T deputy minister of mines Murisi Zwizwai, who he said was a friend of his, had been seriously compromised by Mpofu.

6. (C) While it is encouraging that MDC-T is finally becoming involved in the Marange situation, what is most interesting is ZANU-PF’s involvement. There are important elements of ZANU-PF, Mnangagwa and Chindori-Chininga among them, who are dissatisfied with Mpofu, the Ministry of Mines, and the Zimbabwe Mineral Development Corporation.

It remains to be seen whether they will force the issue. END COMMENT. RAY