1. (C) Jonathan Moyo, former Minister of Information and erstwhile Mugabe intimate, told the Ambassador March 30 that Mugabe is aware that there is diminishing support for him within ZANU-PF and around the country. 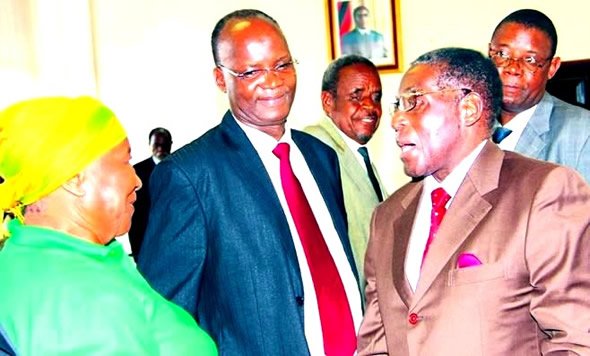 However, if Mugabe decides to run for president again in 2008, Moyo said it is unlikely his decision will be successfully challenged from within the ruling party. Moyo does not expect the ZANU-PF Central Committee on March 31 to deal definitively with the succession issue one way or another.

Moyo noted that Mugabe genuinely fears “hanging” if he leaves office and suggested international guarantees for his safety could help persuade Mugabe to go. The Ambassador responded that this was a decision for the Zimbabwean people.

On sanctions, Moyo accepted the placing of policy makers and their families on sanctions lists, but urged us not to list parliamentarians who are not members of either the ZANU-PF Politburo or Central Committee. End Summary.

3. (C) Moyo told the Ambassador that Mugabe was stung by criticism at the ZANU-PF December conference of his decision to extend his term until 2010. About a month ago, he asked Justice Minister Patrick Chinimasa and Emmerson Mnangagwa, who had advised him on succession in 2005, to update options.

They produced a package of suggestions that included: 1) 2008 harmonized presidential and parliamentary elections; 2) an expanded parliament (to take care of some of Mugabe,s supporters; 3) a constitutional amendment providing for parliamentary election of a new president in the event of the president’s death or incapacity (replacing the present system whereby the acting vice-president takes over for 90 days, followed by new presidential elections).

4. (C) In presenting the package, according to Moyo, Chinimasa and Mnangagwa assumed Mugabe would not run. Outside of Mugabe’s inner circle, most of ZANU-PF wanted him to step down, and they saw the package as a vehicle to facilitate this. Mugabe liked their suggestions and surprised them by saying he would be the 2008 candidate.

5. (C) Moyo informed the Ambassador that after stating his intention to run, Mugabe sent teams to all the provinces to gauge his support among party members, business leaders, security forces, civil society, and the churches. Moyo was aware of the results from seven provinces; the clear sentiment was that he should not run again. After learning HARARE 00000270 002 OF 004

6. (C) Mugabe had hoped, according to Moyo, to have positive responses from the provinces that he could then use at the March 28 Politburo meeting and March 30 Central Committee meeting to leverage support for his 2008 candidacy.

However, because of the lack of support from the provinces, Mugabe largely dampened discussion of 2008 in the Politburo meeting. Moyo also believed no decisions would be taken at the Central Committee meeting, which many had hoped would result in a date for the election as well as a candidate, beyond some posturing by Mugabe and his ZANU-PF rivals.

Dissension in the Ranks

7. (C) Moyo said he thought it highly unlikely the military would act on its own and stage a coup. The surviving members of the General Staff of the Zimbabwe African National Liberation Army (ZANLA) had recently approached both General Solomon Mujuru and Mnangagwa to urge Mugabe’s retirement.

They believed Mugabe would be defeated in 2008, and it was important for ZANU-PF to put forward another candidate to win and preserve liberation gains. Mujuru,s response was to have the leaders talk to Mnangagwa; Mnangagwa in turn rebuffed them, saying the Central Committee had replaced the High Command as a political decision maker.

Believing Mujuru to be involved with both military and CIO dissension, Mugabe had summoned Mujuru. According to Mugabe, Mujuru had not yet responded. Meanwhile, a massive shakeup was underway in the security services, with many re-assignments within and between agencies being made in order to break up potential coup-plotting networks.

10. (C) Moyo said he believed that ZANU-PF opponents of Mugabe would prefer a government of national unity with a presidential election postponed until 2010. However, if they failed to achieve this and Mugabe ran, he would not be challenged from within the party.

But neither would he have strong party support. For this reason, advancement of parliamentary elections to 2008 would be important so that ZANU-PF MPs would get out the vote.

11. (C) With Mugabe as candidate, the rallying cry of the opposition, against the backdrop of a desperate economy, would be “Mugabe must go.” Moyo believed that a ZANU-PF party led by Mugabe was likely to lose any election. He commented, however, that the MDC is also weak at the moment.

Additionally, because of the polarization of Zimbabwean HARARE 00000270 003 OF 004 politics and stigmatization of the MDC, many traditional ZANU-PF voters would find it difficult to vote for the MDC. To be effective, Moyo though the MDC would have to somehow rise above its history.

Moyo commented that the MDC has convinced supporters that with rigged elections, registration is a futile exercise. He argued that the MDC must get young people to register. Then, if an election were rigged, they would feel they had been robbed and would react.

An Exit Strategy for Mugabe*Fear of Prosecution

12. (C) Moyo observed that Zimbabwe has an active human rights community, and many Zimbabweans want Mugabe held accountable for his excesses. He added that the example of Charles Taylor’s expulsion from Nigeria and subsequent delivery to The Hague Special Court was particularly worrying for Mugabe, who had told Mnangagwa that he feared being hung.

Moyo inquired about the U.S. position on immunity for Mugabe. The Ambassador replied that we would respect the wishes of the Zimbabwean people and would understand if they wanted to put the Mugabe era behind them and not work for his prosecution.

Nevertheless, the Ambassador noted “the dictator’s dilemma”*who can give the guarantees he wants and how could he trust them?

On Renewed International Engagement and Sanctions

The Ambassador agreed this was important and said we would expand our efforts, including the hosting of lunches and receptions for parliamentarians, but that many in the party and government had refused to meet with us.

14. (C) The Ambassador discussed in general terms with Moyo principles for international reengagement with Zimbabwe. In particular, he stated the importance of internationally supervised elections.

Moyo agreed that free and fair elections were important; noting Zimbabwean sensitivities about sovereignty, he thought talking in terms of internationally “assisted” elections would be more palatable. This was particularly true, he added, since Zimbabwe had no money to hold elections and would need international help.

15. (C) Moyo said his colleagues were aware of the Ambassador’s remarks in a SW Radio interview that the U.S. should consider expanding sanctions to parliamentarians.

He said he understood a policy of expanding sanctions to include Politburo and Central Committee members (and their families) because they are in decision making positions; he though it unfair, however, to include the large majority of parliamentarians who are not members of either committee.

16. (C) Moyo has a checkered history as a one-time apologist for Mugabe but he maintains good contacts across the political spectrum and he provides a window into ZANU-PF’s internal politics. He confirmed what we have heard from others: Mugabe at this point intends to run for election in 2008 but there is substantial and growing opposition within ZANU-PF to his continued rule.

We don’t expect a resolution in the near term as both Mugabe and his rivals maneuver for the upper hand before forcing a show down. Moyo is also a useful messenger and in that regard we expect the substance of the principles for reengagement to quickly make the rounds of Harare and increase the pressure on the regime by showing ZANU-PF moderates and waiverers that there will be life after Mugabe.

With respect to adding parliamentarians to the visa list, we take Moyo’s point about not forcing the doubters back into Mugabe’s arms, and would limit the additions to those ZANU-PF MPs who are particularly odorous or who are major economic players. DELL

Under pressure Mnangagwa afraid of being toppled by G40 faction

‘Stop harassing me, I have blood pressure’, Gwaradzimba tells Wadyajena