Gono said Mugabe will be dead by 2013

Reserve Bank of Zimbabwe Governor Dr Gideon Gono has found himself in a spot of bother after the latest round of Wiki Leaks revelations claimed that he told US diplomats Robert Mugabe has prostate cancer and was told by his doctors in 2008 that the disease would kill him within five years (2013). 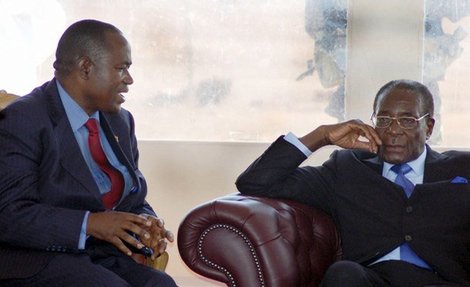 Gono told US diplomats that Robert Mugabe has prostate cancer and was told by his doctors in 2008 that the disease would kill him within five years (2013).

On Friday secret US diplomatic cables released by the whistle-blowing website Wiki Leaks claimed Gono had a private meeting with former US Ambassador James McGee on June 4, 2008. Details of the meeting were filed in a report that quotes McGee saying;

“Gideon Gono, Governor of the Reserve Bank of Zimbabwe (RBZ), told the Ambassador on June 4 that President Robert Mugabe has prostate cancer that has metastasised and, according to doctors, will cause his death in three to five years.

The latest revelations will put Gono under even more pressure following allegations in October 2011 that he had a long running affair with Mugabe’s wife First Lady Grace Mugabe. On Saturday Gono denied the latest Wiki Leaks exposures saying “It’s a lie. I wouldn’t even dare talk about that.”

Political analyst Alex Magaisa in January this year warned Zanu PF against prematurely celebrating the embarrassment WikiLeaks had initially caused to the MDC under Prime Minister Morgan Tsvangirai. Commenting on reports the Attorney General wanted to set up a probe into the WikiLeaks saga, Magaisa wrote;

“There is every possibility that WikiLeaks could end up embarrassing a lot of people, including those instigating the investigations. The nature of the whole mass of WikiLeaks cables is unknown; its full content is yet to be revealed. It is said to go back scores of years.

“It might end up revealing more than drivers of the with-hunt exercise may have bargained for. There are some who are proud to be called heroes today but would rather some parts of their history were kept in the closet forever.

“Wikileaks is a force that has the potential to affect everyone, the hunters and the hunted,” Magaisa warned. To read Magaisa’s article ‘WikiLeaks probe could haunt the hunters’ in full click here

Tension in Zambia ahead of tightly-fought vote