An explosive Zanu PF indaba is in the offing tomorrow as it emerges that close associates of late army commander Retired General Solomon Mujuru are set to push for an explanation from the party on the circumstances that led to the former army boss’ death. 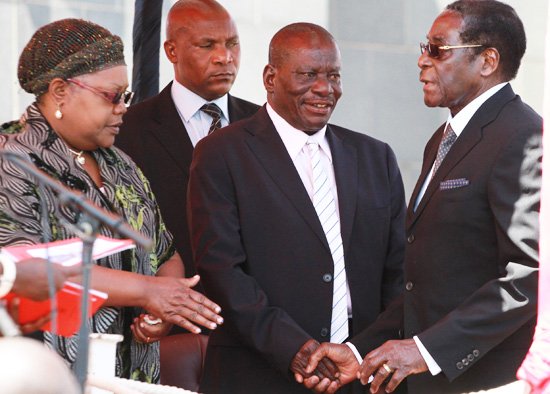 The party holds its National Consultative Assembly meeting tomorrow in the capital at a time when there is mounting tension over Mujuru’s death. Questions have emerged over Mujuru’s death as party members refuse to buy the argument that the Retired General’s death was caused by a “mere candle” fire.

Efforts to sell what the Mujuru faction calls a dummy — that the former army commander was killed by a candlelight-inspired fire — have left party members suspecting foul play. Indications are that there are attempts by unknown people in the system to divert attention and spread the rumour that Mujuru could have been killed by the Israeli mafia over diamonds. 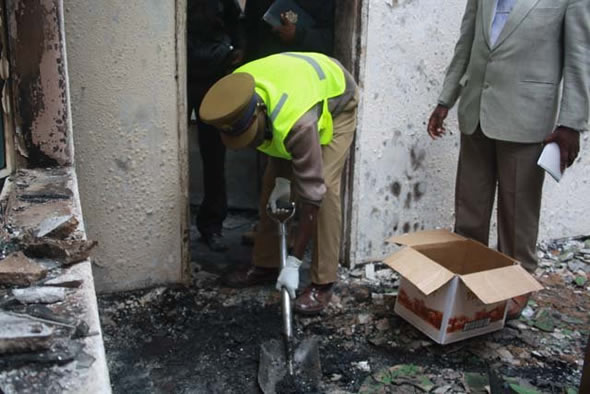 A POLICE detail scraps off the floor flakes of the charred body of Retired General Solomon Mujuru after the removal of his remains from the gutted house.

Party sources said tomorrow’s meeting could be a tense affair as party leaders could be put in a tight corner to explain what could have transpired leading to Mujuru’s death. Mujuru died a few weeks after a showdown with some novice politburo members who were accusing him of working with the MDC.

President Robert Mugabe, at the burial of the late Retired General, bemoaned that Mujuru was killed by a fire.

“Rex Nhongo. We believed in you yesterday when you led the trouncing of the whites. We celebrated with you. You played a great part in politics, you executed your role well as a Member of Parliament. You were a farmer of note.

“You ducked bullets and landmines during the liberation war. Even lions and snakes failed or hated to get you. But how did you allow this one (the fire incident) to take you away like that? I was afraid that Rex would be shot and killed during the war of liberation. I did not think that a fire would take you away in such a painful way. Go well, son of the soil,” said Mugabe.

Vice President Joice Mujuru, who at first appeared calm as suspicion of foul play swirled around her husband’s death, has added her voice to the mystery on her husband’s death. Speaking to Zimbabwe’s national women’s soccer team that visited her home last week, Mujuru said it was surprising that her husband could succumb to a fire given the design of the family’s bedroom.

“We have not been told what happened between 8pm when he arrived at home until the next  morning when the fire was discovered. We are just told that he was killed by a fire and that is it. There is nothing else that is said,” said the vice president.

Moreover, Mujuru said it was unclear how Mujuru could fail to escape the fire through the windows when they were not even secured by burglar bars. The Mujuru faction seems to be spurred on by a report by private investigators that suggested there could have been foul play in Mujuru’s death.

The report, compiled by South African investigators, is said to have shocked and devastated family members. The contents of the report are yet to be made public. Fissures between the Mujuru faction and the one led by Emmerson Mnangagwa, which is said to be determined to succeed President Mugabe, are seen deepening following the Mujuru saga.

A party source said there was a push by the faction to raise the issue at tomorrow’s meeting.

“It is very clear to all who care to observe that the party, save for the condolence messages that came from members and other arms of the party, has kept silent on this saga,” said a source.

“It was expected that something was going to be said by the leadership at either the family home or the burial about the party’s position regarding Mujuru’s death. That deafening silence is what is pushing members to the resolution that the matter must be raised at the Friday meeting because there is no way such a death can just be allowed to die like that,” added the source.

Sources said party members would request that a party position be spelt out regarding the Retired General’s death.

“We are pushing that the matter be discussed towards the end of the meeting. We are aware that for other reasons, the top leadership of the party might decide not to put it on the agenda for the Friday meeting. But we will ensure that it is discussed,” the source said.

Zanu PF spokesperson Rugare Gumbo could not be contacted for comment yesterday as his phone went unanswered. It emerged yesterday that he was locked up in a politburo meeting. Daily News

Pirate driver shoved into boot of own car by robbers