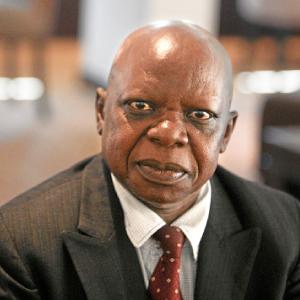 Wilfred Mhanda, a former guerrilla commander, has released his war-time memoirs exposing how President Robert Mugabe ruthlessly suppressed him and other commanders in the late 70s on his way to becoming the Prime Minister of Zimbabwe.

But in Dzino, Memories of a Freedom Fighter, Mhanda answers his critics with a riveting account that offers an alternative interpretation of events of the late 70s when Zanla commanders were arrested for questioning Mugabe’s suitability as leader of the then liberation movement.

Chinotimba under-fire over leaked video of him hammering…

Their harrowing prison ordeal included staying in a crowded tiny cell that was flushed once in 10 days, eating rice laced with sand grains, bathing once in three months and staying in a disused toilet where the urinary served as their pillow.

Despite these trials and tribulations, Mhanda asserts the prominent role he played in the liberation struggle, describing in detail his involvement in key events and processes that shaped the campaign to oust the colonial regime.

Mhanda, who was a Zanla commander, was part of the guerrilla leaders who authored the famous Mgagao declaration that resulted in Reverend Ndabaningi Sithole being deposed as the leader of Zanu PF. That time Zanu PF leaders were in detention following the assassination of Herbert Chitepo.

Their arrest left a void that could have been catastrophic to the war effort but up stepped Mhanda and the other commanders; the late Rex Nhongo (Solomon Mujuru) Elias Hondo and James Nyikadzinashe to revive the war effort.

The group joined forces with Zipra commanders to form the Zimbabwe People’s Army (Zipa) and then launched a devastating three-pronged military incursion into Rhodesia that eventually forced Smith to the negotiating table.

Mhanda says at the time Mugabe and the late Edgar Tekere had been banished to the coastal town of Quelimane by Mozambican President Samora Machel, who “did not trust Mugabe”. An arranged encounter between the commanders and Mugabe at Chimoio refugee camp was the beginning of problems between them.

Mhanda recalls that Mugabe’s autocratic demeanour led them to doubt his suitability as a Zanu leader and they made their reservations known to the other leaders. Soon Zipa leaders were accused of harbouring intentions to transform the military body into a political party.

When Zanu PF leaders were released from a Zambian prison, Zipa’s differences with Mugabe reached a boiling point. At the Lusaka summit held in October 1976, Mugabe summoned Mhanda and the other young military leaders and delivered a simple message: disband Zipa.

Mhanda responded by saying the decision on the matter could only be made by former Tanzanian president Julius Nyerere as chairman of the Frontline States.

“Mugabe was not in the least amused by my intervention, one could see his body language.” Mujuru hardly said a word and sat motionless through the meeting, Mhanda said. “It was clear he was having consultations with Mugabe behind our backs.”

After the emotionally charged meeting, Mhanda contemplated stepping down as Zipa commander after noting, “Mugabe now saw me as the chief obstacle to the imposition of Zanu PF’s leadership on Zipa’s military committee”. Mujuru did not accompany his comrades to the meeting with Nyerere, where they were given the nod to continue with the war.

It was clear to the other Zipa leaders that the late Mujuru, who was highly praised at Heroes Acre by the President, had entered a secret alliance with Mugabe while at the same appearing to be supporting the cause of his military colleagues.

Mugabe opposed unity with Zapu, pushed for Zipa commanders’ arrest: Dzino When it was time for the Geneva Conference, Mhanda turned down Mugabe’s call for the military leaders to attend.

Without the guerilla commanders, Mugabe was ridiculed by Smith who charged he had no time to waste talking to people who did not control the guerillas fighting the war. This prompted Machel to order the military leaders to go to Geneva.

Mhanda, who described it as a bitter pill to swallow to sit behind Mugabe at the conference, described how they were paraded at Geneva as if we were “there to lend our support to Mugabe”.

After Geneva, storm clouds gathered over Zipa’s military leadership. The Mozambican government, which favoured a negotiated end to the war, turned against them. Zipa leaders were soon to realise that during their absence, the command at the camps had been reorganised.

Relations between the nationalist leaders and the Zipa commanders were to completely break down. Zipa insisted Mugabe was still secretary general of Zanu and a new president would be elected at a congress after liberation. Zipa also opposed Mugabe’s unilateral decision to form a Zanu PF central committee packed with handpicked members, in violation of the party’s constitution.

Zipa also saw unity with Zapu as central to thwarting imperialist machinations. Mugabe was vehemently opposed to unity with Zapu. “Differences such as these were blown out of proportion and construed as a revolt against Mugabe’s leadership,” Mhanda said.

In January 1977, a meeting called to “rationalise leadership structures” turned nasty for Zipa leaders who ended up in a filthy basement of an abandoned hotel on the shores of the Indian Ocean. Mhanda said Mujuru was “complicit in the treacherous scheme” to arrest the Zipa commanders, as he left early for camps to pacify the fighters ahead of the arrests.

But unknown to Mhanda, Machel had prevailed on Mugabe to spare him from arrest. The following morning Mugabe proposed that they work together. Mhanda disagreed and his last day of freedom was January 21 1977 until January 1980 when he was released. In total, Mugabe’s crackdown on Zipa netted 50 officials. Six hundred fighters were also arrested, leaving him without any challenge to his leadership.

Jabulani Sibanda, who is causing havoc in Masvingo, is not a genuine war veteran, according to Mhanda. “Sibanda joined Zipra in 1979 and immediately went to Angola for training, only returning to Zimbabwe after independence. He thus has little claim to being a legitimate war ‘veteran’.

“As for (Joseph) Chinotimba, there is no record of him having trained with Zanla before the 1979 ceasefire.” The Zimbabwe Standard

Chinotimba under-fire over leaked video of him hammering Mnangagwa