SADC must stop the army: Tsvangirai

Prime Minister Morgan Tsvangirai expects this week’s SADC Summit in Luanda, Angola to decisively deal with the issue of Zimbabwe and come up with a position on the role of the military following threats to destabilise the country by some rogue elements of the security sector. 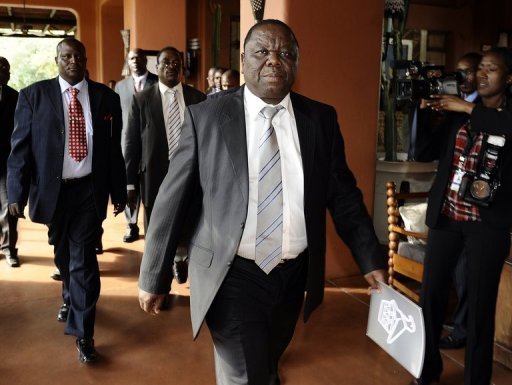 Tsvangirai at the SADC Troika summit in Livingstone, Zambia at the end of March 2011

The MDC President told The Real Change Times in an exclusive interview that some few misguided elements among the security establishment have taken a political position making unconstitutional statements that undermine the Global Political Agreement (GPA) which is the backbone for the transitional Government.

The military has in the past delved in politics with some individuals such as Brigadier General Douglas Nyikayaramba threatening to disregard the will of the people in the likely event that President Tsvangirai wins the pending elections.

Nyikayaramba has annointed himself spokesperson for those who are keen to see Zimbabwe dragged back to the precipice and to the Stone Age where only the few rich immoral hoodlums connected to politicians illegally benefit from illicit deals.

The army has in the last few years become a very key instrument in the intimidation and state sponsored violence against the people. Military personnel have been fingered in the gruesome murders in the Matabeleland and Midlands provinces Gukurahundi massacres and featured prominently as the major culprits during the tortures and murders of the 2008 election.

This, Tsvangirai said has led to the calls by the MDC and other democratic alliances for the re-alignment of the security sector in Zimbabwe.

“We are not seeking the overthrow off our security agencies but their realignment so that they reflect the new dispensation by being non-partisan. The re-alignment of the security establishment is important given the recent comments made by some individuals among the military which literally undermine the whole effort and transition that we have been working towards.

“SADC should be alarmed by these comments because they run counter to the expectations of a roadmap that will lead to credible elections. SADC must come up with a position on the role of the military because it would appear that some in the military in Zimbabwe have adopted a political position which is contrary to the spirit of democracy.

“But it is not the whole institution that is acting unconstitutionally because I am very certain that the majority of serving army officers do not go along with some of the opinions that have so far been expressed. The agreement in the GPA is that these are national institutions but we have now over the last two years learnt that some of the members in the military do not respect the authority of the inclusive government.

“They are still partisan and re-alignment of the security sector is important so that they play a non-partisan role. We are not dismantling the security sector but we want re-alignment so that they contribute to a democratic dispensation. But over the last two years we have been drifting away from that principle and therefore it has become fundamental that this issue should be part of the reforms we are pursuing,” added the Premier.

Tsvangirai said SADC should discuss and take a position on the roadmap to a free and fair election that has been agreed by the parties. “There are still some serious disagreements, but the region should at least adopt the roadmap so that the agreed areas can begin to be implemented,” he said.

Tsvangirai paid tribute to the facilitator, South Africa President Jacob Zuma and SADC, for remaining seized with the issue of Zimbabwe. “We have become a perennial agenda item on SADC summits and we have to ensure that we resolve these problems once and for all.

“We have become an embarrassment because we cannot respect our own signatures. We cannot even implement what we have agreed and the guarantors have to assist us, especially those who have shown intransigence in respecting the GPA,” said President Tsvangirai.

He urged SADC to urgently deploy monitors to assist the Joint Monitoring and Implementation Committee (JOMIC) as resolved at both the Livingstone and Sandton SADC summits. Zanu PF has further stalled media reforms by refusing to licence private broadcasters despite an agreement by the negotiators and the Principals.