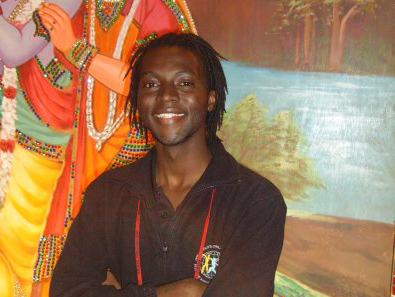 The assistant editor for H-Metro Robert Mukondiwa faces dismissal after being caught red-handed bonking a male hooker during a Presidential trip to Windhoek, Namibia. As is custom, it was Mukondiwa’s turn to accompany Robert Mugabe on his numerous international jaunts.

Editors at Zimpapers take turns to accompany the President on his lucrative trips where they are paid hefty allowances. Mukondiwa accompanied President Mugabe to cover the summit of liberation war movements in SADC last week.

While in Windhoek, Mukondiwa, one of the finest journalists in the country, reportedly shared a room with an intelligence operative to mitigate the costs. But while the CIO operative was away, Mukondiwa hired a male gay hooker for a good time.

But the CIO operative returned earlier than anticipated and walked in on the two while they were humping. He reportedly alerted Mugabe’s spokesman George Charamba. The matter was said to have reached Mugabe’s ears, who blew his top.

He reportedly summoned Information minister Webster Shamu about the matter and enquired why he had approved a homosexual to cover his trip when he knew his revulsion against gays.

Shamu was said to have tried to protect him, but Mugabe reportedly said it was not the first time such a case had been brought to his attention. He reportedly demanded to know who was protecting Mukondiwa at Zimpapers and why. Over the weekend, a crisis meeting was held at Zimpapers to decide Mukondiwa’s fate.

It was resolved over the weekend that he should face a disciplinary hearing. Human Resources at Zimpapers was said to be seized with the matter, according to both intelligence and Zimpapers sources. But informed sources said he would be “extremely lucky” if he survived this one.

Last year he was again caught humping a male reporter in the newsroom after hours by security. The matter was swept under the carpet, much to the chagrin of Zimpapers staffers. Efforts to reach Mukondiwa for comment were futile on Monday. Zimbabwe Reporter

Has Zimbabwe Diaspora been neglected?

Mnangagwa and Charamba are envious of Zambia’s democracy – Nomazulu Thata