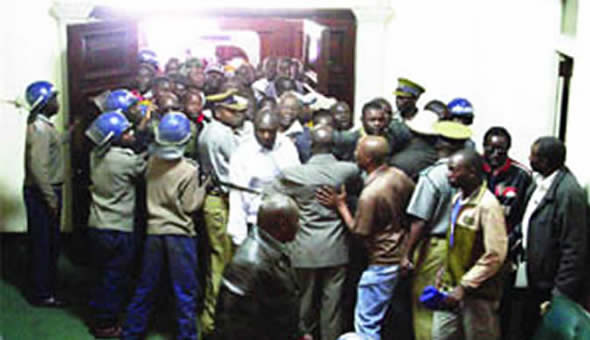 HARARE – President Robert Mugabe’s Zanu PF supporters stormed Parliament in Harare yesterday, beating MPs and journalists while women traders were rounded up in Mbare and forced to attend their party meeting, as the political situation in the country deterioratesfurther.

The Zanu PF mob caused mayhem inside parliament, forcing the cancellation of business. The violent scenes at parliament and in Mbare are the latest in a string of violent events that have spread as far as Mutare, Chinhoyi and Masvingo, where Zanu PF supporters forced parliamentary committees from carrying out public hearings on human rights issues.

Yesterday’s scenes at parliament, where an MP was dragged by the necktie while receiving heavy punches and kicks, as journalists were forced to run for dear life after one of them was head butted by a female Zanu PF mobster, highlighted the chaos.

MPs and journalists including those from the Daily News on Sunday had to seek police protection as hundreds of violent Zanu PF crowds forced the Joint Committee of the House of Assembly Portfolio Committee on Justice, Legal Affairs, Constitutional and Parliamentary Affairs and the Senate Thematic Committee on Human Rights to abandon a public hearing on human rights issues.

Visibly drunk, and in a clearly planned pattern, the mob beat up people in front of the police, who did not arrest anyone. Trouble started when the public who were in the parliament building to give evidence to the committee finished singing the national anthem. The mobsters went for MDC MP for Hwange Central Brian Tshuma whom they accused of not singing the national anthem.

Similar accusations were levelled against the Standard reporter Nqaba Matshazi. The Zanu PF mob shouted abusive and unprintable words to the MP, calling him a “sell-out” who could not sing the national anthem. Outside parliament, they formed a barricade as they pushed and shoved, blocking the public from attending the hearing.

Several MPs were stranded at the door with the youths blocking the entrance. Among the MPs who were blocked were Misheck Shoko, Monica Mutsvangwa and Cephas Makuyana. The Daily News on Sunday witnessed the pandemonium as the atmosphere turned tense outside parliament. The Zanu PF gangsters threatened anyone they suspected of being an MDC supporter.

Some of the Zanu PF rabble-rousers who managed to force their way into parliament heckled members of the public who were in the chambers and disrupted proceedings, which were just about to begin. Attention turned to Tshuma and Matshazi who were punched for their “offence”. The rowdy crowd held Tshuma by the necktie, dragged him out of parliament building before assaulting him.

Matshazi later fled. Another journalist Levi Mukarati, from the Financial Gazette, was head-butted by a vicious female mobster before he sought police protection. Police had to protect journalists as the mob bayed for the blood of anyone they identified as a journalist. Zimbabwe Lawyers for Human Rights (ZLHR), one of the organisations that had intended to give a presentation to the committee, said Mukarati sustained bruises from the assault while Tshuma lost one of his mobile phones and cash.

Singing Mugabe praise songs, the mobsters outside parliament demanded that they be let in the building before forcing themselves in to demand that official proceedings should not be allowed to start. Committee chairman Misheck Marava’s pleas for peace fell on deaf ears and were forced to abort the hearing as the youths demanded that he address the public in vernacular languages instead of English.

Some people passing through the parliament building were caught in the crossfire. A white man who was passing by was physically attacked and rescued by police from further assault as the mobsters turned racist. Police finally managed to restore order and drove everyone away from parliament. Journalists and MPs had to wait for the youths to disperse before they were allowed to leave.

“Zimbabwe Lawyers for Human Rights unreservedly condemned the conduct of the rowdy mob, the disruptions of the public hearing, not only in Harare, but in Chinhoyi and Mutare, and the assaults on a legislator and journalists,” said ZLHR.

“These disruptions, which constitute contempt of parliament in terms of the law, are criminal offences. As such, these actions must be immediately investigated by parliamentarians and the Zimbabwe Republic Police, and the culprits — including the invisible masterminds behind the disruptions — identified in order to bring them to book,” the group said.

Rowdy Zanu PF mobs also disrupted the committee’s meetings in Chinhoyi, Masvingo and Mutare in past weeks. In Mbare’s Mupedzanhamo market, it was an all-male affair after Zanu PF mobsters rounded up all female vendors and force-marched them to Number 4 Grounds near the Mbare flats for a Zanu PF Women’s League meeting.

When the Daily News on Sunday visited the market, there were no women in sight, even the tough ones that sell skin creams and carrier bags. Men inside the market said the women were scooped from the market early for the meeting. One male trader who only identified himself as Tindo said: “The market usually opens around 6 am and by 9 am the women had all been force marched to attend the women’s league meeting.

It is now such an inconvenience to us because we have to work double while they are at the meeting,” he said. Mupedzanhamo is one of the country’s busiest and largest markets that mostly trades cheap second-hand clothes mainly smuggled from Mozambique. Daily News

Mnangagwa must tell us who healed Gukurahundi wounds?

Dynamos do the double over CAPS United