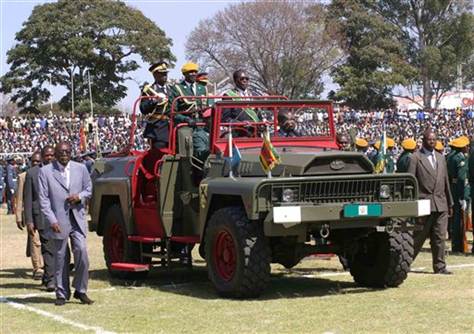 The Zimbabwe National Army is no longer a formidable force despite the Wild West antics of invincibility portrayed by hardline generals who have threatened a military coup in the event President Robert Mugabe loses the next polls.

The combined effect of targeted Western sanctions and procurement decisions in the past has resulted in the depletion of the ZNA’s firepower – to the point that the entire 40 000-strong army has just 10 serviceable armoured reconnaissance vehicles.

Mugabe riding on a Chinese made military vehicle

According to a document by South African-based think-tank Southern Africa Report (SAR), the ZNA has not yet recovered from the erosion of its resources during the 2007-2008 political and economic crisis, when extreme shortages of foreign exchange and Zimbabwe’s international isolation seriously eroded its resource base.

The diversion of the few remaining resources to non-military activities meant to support Zanu (PF)’s campaign efforts and large-scale corruption by senior army officials have worsened the situation. Operational equipment is not being repaired. Zimbabwe had 90 Cascavels at the end of the 1980s, but lack of spares forced commanders to cannibalise parts to keep some in good fighting order.

“Of the 90 Cascavel armoured reconnaissance vehicles supplied by Engesa of Brazil, less than 10 are serviceable,” the think-tank said. Four of the Cascavels were captured by rebels in the Democratic Republic of Congo during Zimbabwe’s participation in the central African country’s civil war in the late 1990s while another 77 are grounded for reasons ranging from lack of tyres to shortage of engine spares.

Most can now be seen rotting at a vehicle graveyard at Inkomo Barracks near Harare. Despite having been refurbished by North Korean technicians in 1999 and 2000, most of the main battle tanks and tracked armoured reconnaissance vehicles are out of commission.

In the mid-1990s the ZNA was forced to de-commission the Puma – the armoured troop-carrying vehicle inherited from the Rhodesian Army – because of difficulties in sourcing Benz spares. The Puma is built on the Mercedes Benz engine and chassis. All the other soft-skin Benz trucks, including the highly versatile, all-terrain Unimog, have also been phased out for the same reasons.

“Of the 20-odd 30-tonne Benz and Scania trucks, only two are apparently serviceable – ZNA sources claim even these are now out of commission,” SAR said.

The mechanised infantry battalions are equipped with an assortment of locally assembled armoured personnel carriers (APCs) based on the chassis and engine of the German Unimog-Benz, and about 16 French Acmat APCs. All the Unimog-based APCs were assembled for the Rhodesian Army during the 1970s liberation war.

Many were destroyed during the Mozambique campaign in the 1980s when Zimbabwe deployed its forces to guard the key railway route to Beira port. Others were either destroyed or captured during the DRC campaign. Having seen action in Mozambique, Somalia, Angola and DRC, they are no longer in good fighting condition.

“The economic crisis and the deterioration of diplomatic relations with the EU countries have made it extremely difficult for the ZNA to source critical spares to maintain the APCs in good fighting condition,” the report said.

The French Acmats are not configured for military operations, but for police crowd-control operations. Its introduction into the ZNA coincided with the advent of violent food riots in January 1998 and the deployment of troops on the streets of Harare in a role previously reserved for the Police Support Unit.

As with the Unimog-Benz APCs, it has not been easy to source spares for the Acmat. The APCs are therefore in a state of disrepair. The Main Battle Tanks (MBTs) are the Russian T-54, Korean T-55 and the Chinese T-59 (30), T-63 (unknown) and T-69 (10). Most of the MBTs have already been decommissioned. They were too old and spares were becoming difficult to acquire.

The Russian T-54s were inherited from former Zipra forces at independence in 1980, while the Korean T-55s came as part of the equipment for the notorious Fifth Brigade, which until the end of the civil war in Matabeleland and the Midlands, was not part of the ZNA, but was a security arm of the then ruling Zanu (PF) party.

It is not known how many T-54/55 tanks remain operational. But despite their refurbishment by Korean technicians in 1999-2000, the majority are out of commission due to a shortage of spares and lengthy periods of disuse due to a biting shortage of fuel and training ammunition.

SAR also said the ZNA’s standard infantry troop carrier and first and second-line logistics fleets (the Austrian Steyr and the French Acmat) are largely depleted. Attempts to replace the third- and fourth-line logistics vehicles (8-tonne, 10-tonne and 30-tonne Benz and Scania trucks) have been unsuccessful – the fleet of 200 Chinese Dongfeng trucks was unable to adapt to local conditions.

Just a couple of dozen remain operational, but in a poor state of maintenance.

“The entire available ZNA transport fleet would barely be sufficient to transport a battalion,” said the think-tank. The army has been the bedrock of Mugabe’s power since Zimbabwe’s political crisis started in 2000. Army generals have vowed to crush any attempts to remove Mugabe from power, whether by the ballot or other means. The Zimbabwean

Mnangagwa must tell us who healed Gukurahundi wounds?

‘Coup soldiers’ are hungry, eating ‘sadza and beans without cooking…