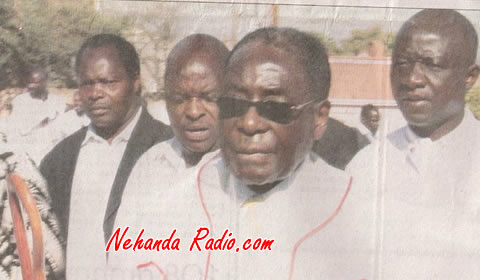 Shocking video footage has exposed how ZANU PF has infiltrated Apostolic Churches countrywide and is using compromised preachers to campaign for Mugabe and ZANU PF ahead of national elections.

The footage shows how the Vadzidzi Va Jesu branch of the Apostolic Christian Church has emerged as a vocal supporter of ZANU PF. Sermons from Rushinga, Epworth and Mudzi North show how the preachers are spreading political hate messages and propping up Mugabe’s regime.

In Rushinga the preacher was filmed saying; “Gabriel is supreme; he carries the blood of Jesus. So we can’t throw him away. In this party we always say forward with R.G Mugabe and you also agree, Isn’t that so? Who is Gabriel? Isn’t he the President? For him to be named Gabriel, were there no other names to give him? He is the chosen one.”

Britain not sure if Nehanda and Kaguvi skulls are in its…

Mwazha and other church leaders support Zanu PF for personal…

Letter from America: Honoring Mbuya Nehanda was a coup for…

The preacher rumbles on with his sermon saying even Mbuya Nehanda, the spirit medium behind the First Chimurenga, ordained Mugabe as somebody suitable to lead Zimbabwe. “We shouldn’t just pick anything and vote for it to be the President of our country. You shouldn’t agree to such things,” the combative preacher tells a visibly subdued and intimidated congregation seated on the ground.

In Epworth, another preacher is captured on film asking his congregation which church has the largest number of ZANU PF chairpersons? The congregation, respond by saying “here’ meaning the place where they are holding the service. The preacher then tells them; “As we are gathered here, we all belong to the party (ZANU PF). And the football teams are also part of the party.

In Mudzi North another preacher is filmed with a more grandiose take on things. He leads his followers in singing, “Gabriel (Mugabe) is going to rule the whole of Africa.” In the actual sermon, he says; “We are sorry for some of our fellow black colleagues who meet and work with white people. It’s time now when the choice is either we lose the country or we hold onto it.”

These sorts of sermons are being replicated across the country by several ‘fake prophets’ in the pay of ZANU PF.

The growing influence of the Apostolic Churches in Zimbabwe has seen ZANU PF trying to harvest more followers from there. The three major Sects are reported to command close to 5 million followers within Zimbabwe alone. Of the three, the African Apostolic Church has an estimated 2.5 million members, Johanne Marange 1.5 million and the Johanne Masowe WeChishanu around 1 million followers.

Nothing demonstrated ZANU PF’s strategy better than the fact that Mugabe pardoned convicted serial rapist, Madzibaba Godfrey Nzira. In 2003 Nzira, a self-proclaimed prophet, was jailed for 32 years, later reduced to 20 years, on seven counts of rape and one count of indecent assault. Nzira in the past has claimed Mugabe was a “divinely appointed king of Zimbabwe and no man should dare challenge his office.”

Nzira’s bootlicking paid off as he walked out of prison a free man this year, courtesy of a presidential pardon. The Justice Ministry attempted to justify the early release, saying it was made on compassionate grounds owing to Nzira’s ill health. However Nzira has shown that he is fit enough to go on a tour drumming up support for Mugabe. He even celebrated his early release by hosting a week long party that was also attended by the Attorney General Johannes Tomana.

In May this year, members of the Johanne Marange Apostolic sect, invaded one of the biggest dairy farms in Chipinge and ordered the farmer to leave within 24 hours. Members of the sect, together with a mob of ZANU PF youths, stormed Spillemeer Farm and declared they had taken over. The farm’s owner Francois Kotze said the church members were using ZANU PF youths to intimidate him and they also forcibly grabbed over 100 cattle from him.

A report by the Daily News, quoting an official from the Commercial Farmers Union, said; “The Apostolic faith members ordered Kotze to remove a drove of pigs claiming the presence of the animals ran contrary to their religious beliefs. They however, demanded that he slaughter several sheep to feed them. They declared the cattle as theirs. They are now milking the cattle themselves,” the report said. The police refused to intervene in the matter, claiming it was political.

As the video evidence on our website shows, ZANU PF is trying to build up an alliance with as many of these influential Apostolic Church sects as possible, allowing them to join in the pillaging by the party, in return for political support during the elections.

Every Tuesday SW Radio Africa investigates unsolved and deliberately ignored cases of political violence, torture, murder and other forms of abuse, by people in positions of authority. The series is receiving tremendous public support and information and the coming weeks are set for some explosive exposures. SW Radio Africa

Kiglon FC boss sucks up to Mugabe in letter

Letter from America: Honoring Mbuya Nehanda was a coup for Mnangagwa!