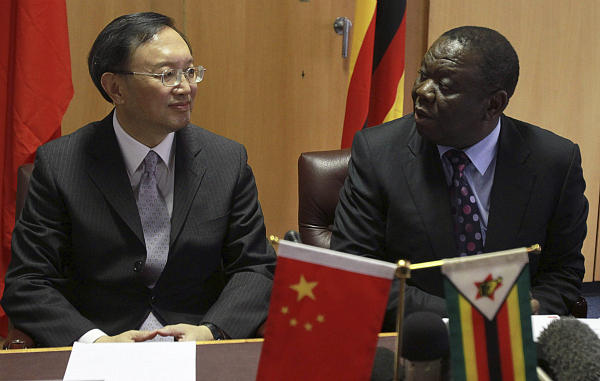 Government’s decision to borrow close to $100 million to finance the military has caused outrage. Debt strategists, civil society, professional unions and ordinary Zimbabweans are querying the coalition government’s prioritisation, particularly with the gaping funding needs in key sectors such as health and education.

On Tuesday, Parliament approved a deal that would see China loan US$98 million to Zimbabwe for the construction of a state of the military college for top military officers in exchange for diamonds. The deal, signed by finance minister Tendai Biti on 21 March this year, will run for the next 20 years.

“The loan ties the diamond resource and it creates generational debt to the future of this country,” said Showers Mawowa, an economist with the Zimbabwe Coalition on Debt and Development (ZIMCODD). ZIMCODD is involved in economic literacy campaigns on issues of debt, trade and sustainable development.

‘ED lacks political will to fight corruption amid…

“The Chinese know that they have a lot to gain from this loan agreement and this is why they have agreed to it. We know that there was a lot of secrecy surrounding this loan and it is time both the Zimbabwean and Chinese governments come out in the open to explain to the people of  Zimbabwe about Chiadzwa diamonds and this loan,’’ said Mawowa.

The loan adds to Zimbabwe’s already heavy debt, which is over US$7 billion. In March this year, Prime Minister Morgan Tsvangirai told top business executives and government officials at an investment conference that part of this debt would be cleared using diamond proceeds.

That same month, the government was signing an agreement that ties the same diamonds to even more debt, a development described by organisations and people interviewed by the Daily News as a scandal.

“Millions of Zimbabweans are living as inferior citizens outside the country because they fled army-driven violence. They had put faith in the coalition government to improve the situation so they can return home. Yet that same government is signing Zimbabweans into bondage by giving away resources to fund the military, an institution known for violently protecting Mugabe,” said Gabriel Shumba, whose Zimbabwe Exiles Forum fights for the rights of exiled Zimbabweans.

The country’s run down public health and education sectors have only shown mild signs of recovery due to donations from international community partners such as United Nations agencies and the European Union.

“The education sector needs about US$200 million to be revived and this is the money they should be borrowing, instead of building the defence college,” said Raymond Majongwe, secretary-general of the Progressive Teachers Union of Zimbabwe.

“The civil servants and the teachers need money and we are waiting for it. We are now wondering whether we are second class citizens of this country. We might be civilian but we are workers of the government who need to be taken care of,” said Majongwe, whose organisation on Thursday said members would embark on strike action at the end of this month if salaries are not reviewed.

That the government is fêting the military ahead of elections possibly this year or early 2012 has unnerved many, given the army generals’ growing appetite to interfere in political processes. Controversial top soldier, brigadier-general Douglas Nyikayaramba last week sensationally demanded elections this year. The general, a fierce Mugabe loyalist, repeated his colleagues’ statements that they would not allow anyone other than Mugabe to rule.

Commentators queried the MDC’s wisdom in legitimising the deal. “The other thing to consider is that Zimbabwe does not have a good record of the defence forces. This is why there is an issue of security sector reform. There is possibility that the project could be used to pursue an agenda of harming the people of the country,” said Mawowa.

Raymond Majongwe says the money should have been used to fund the education sector and not a millitary college.Morgan Tsvangirai told business executives that part of the debt will be cleared using diamond proceeds. Daily News