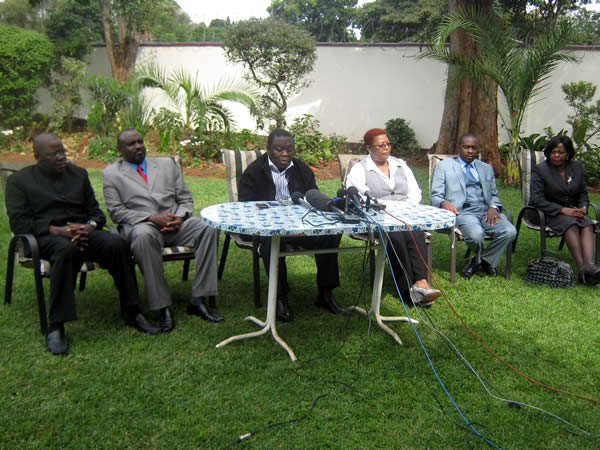 The newly elected MDC-T National Standing Committee today held its first meeting at Harvest House, Harare.  The meeting was attended by all members and was chaired by President Tsvangirai. Only the Treasurer General, Senator Roy Bennett who is out of the country failed to attend the meeting.

The new executive with 13 members was elected in Bulawayo during the party’s Third National Congress and will be in office for the next five years.

The other members are; Bennett as the Treasurer General, Elton Mangoma, the Deputy Treasurer General, Nelson Chamisa as the National Organising Secretary with Abednico Bhebhe being his deputy; Douglas Mwonzora is the Secretary for Information and Publicity. Theresa Makone is the Chairperson of the Women’s Assembly and Solomon Madzore is the Chairperson of the Youth Assembly.

In Masvingo Province, Morgan Madondo, the MDC Youth Assembly Chairperson for Ward 8 in Bikita South, on Monday night managed to escape abduction by six State security agents at his home in Chada Village.

Madondo said on the fateful night a team of six armed men led by one Muyembe and driving in a white unmarked truck came to his home and tried to take him away by force. However, because of the darkness, Madondo managed to escape.  Muyembe is a known member of the Police Internal Security Intelligence and is based at Mukore Business Centre in the area.

In Manicaland province, Tonderai Gift Nyabadza, an MDC activist who was arrested on Monday appeared in court at the Nyanga Magistrate’s Court facing trumped up charges of inciting political violence in Nyanga North in February. He was remanded out of custody to 23 May after paying a US$50 bail.

Machete Magen’a the MDC Youth Assembly chairperson for Mutare West in the same province who was arrested on Monday on spurious charges of holding an illegal meeting two weeks ago without notifying the police is still detained at Mutare Rural Police Station.