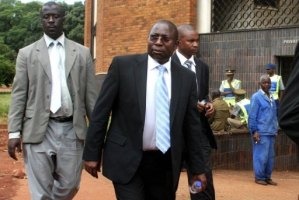 Whoever within the Zanu PF machinery decided to haul Energy Minister Elton Mangoma to court must be commended, though in hindsight he or she must be cursing themselves.

If at all he is pleased with the progress of the trial, then probably he belongs to that brigade in Zanu PF that is playing ‘bhora mudondo’, the same brigade that played ‘bhora mudondo’ as regards the election of the Speaker of parliament.

In their overzealousness to embarrass MDC-T ministers, and prove to the public that MDC-T government officials are corrupt, inept and mediocre, Zanu PF has shot itself in the foot in spectacular fashion.

In addition to the shenanigans, drama, controversy and jurisprudence associated with the courtroom, their role as a public platform for interrogation of public issues, remain heralded. We get to know what in normal circumstances we are not supposed to know through court proceedings.

Proceedings are public, available and therefore undisputed. The watching public are afforded a fair chance to understand operations that are covert and make informed decisions and judge who best in their opinion is right.

In addition defence lawyers love their day in the court: the opportunity to cross examine so called ‘star state witnesses. Now it is not Hon Mangoma who is the subject of discussion, but how US$35 million disappears under NOCZIM, cash strapped public body, and no one is taken to account for the disappearing of such a vast sum of money.

This can only happen in Zimbabwe. The permanent secretary is quoted telling the court that ‘those responsible are known’ through a forensic investigation done by the Comptroller Auditor General. The same permanent secretary Justin Mupamhanga objected to the Hon Minister referring the alleged looters to the AG or police for prosecution, asking to ‘come up with a better way forward’.

Apparently the better way forward was to allow the alleged looters to be retrenched with very high packages, packages the Hon Minister refused as it was tantamount to ‘rewarding criminals’.

Justice Samuel Kudya, in granting Hon Mangoma in the High Court bail had noted ‘it seems to me that in the absence of evidence that the applicant personally benefited from the deal, his actions were prompted by national interest’. Is this the criminal that Zanu PF wants us to believe?

Contrary, the true profile emerging is that Hon Mangoma is a minister of repute, high integrity who is hard working and honest, thriving to nurture a culture of accountability and responsibility in the corridors of power. The generality like this kind of Minister, the kind that know criminals must be prosecuted and not rewarded with high packages.

The blind muppets prosecuting Hon Mangoma did not anticipate this unconscious marketing of the MDC-T brand. These emerging details from the court are the sort that defence attorneys in such cases love to dance on.

I am reminded of one Ari Ben Menashe, the ‘star witness’ in President Tsvangirai’s treason trial in 2002. He arrived from Canada thinking he would have a field day in court embarrassing Tsvangirai.

When the good counsel led by George Bizos started cross examination, the case degenerated into a circus that left even the Hon Judge displeased. Menashe ended up complaining for the time it was taking to complete the case as he wanted out of the country soonest. ZANU PF was left with eggs on their faces.

Then in 2000 Kenneth Manyonda took to the witness box during the petition challenging the results of Buhera North parliamentary elections result. Talent Mabika and Tichaona Chiminya had been torched to death by known ZANU PF functionaries led by Joseph Mwale in the same constituency.

Manyonda was the Zanu PF candidate at the time, as well as Manicaland Province Resident Governor. The car used for the atrocity was under Manyonda’s control. He had actually given the car keys to his driver that night the murders were committed.

Manyonda sought to deny any knowledge and complicity to the murders. Enter Advocate Eric Matinenga. In front of cameras, journalists and the public, Manyonda was taken to task meticulously. The case exposed the sanctioning of election violence from the highest offices of the state.

Not only was the resident Governor aware of the murders, he had supplied the truck used for commissioning the crime. In addition, he had received the truck back the following morning knowing full well what had happened the prior night but never raised an eyebrow.

We lost count how many times Manyonda asked the Judge to go to the toilet as he kept seeping water every four seconds. To conclude that he was made to look stupid is an under-statement.

If senior management in a government parastatal can make US$35 million disappear without facing arrest, what more about deals done by senior politicians and securocrats presiding over Zimbabwe?

Either the money was looted under strict orders from powers above, powers that are protecting these individuals from arrest, or simply US$35 million is loose change to warrant any attention.

But then, we recently heard how Zanu PF led by the egg headed professor strenuously refused Hon Biti’s demand for an audit of the diamond proceeds. Very ironic that the minister of finance is not allowed to account for state money. What are they afraid of?

More revealing was the presence of two procurement boards in the National Oil Company of Zimbabwe (NOCZIM).Government tenders run into millions and where there is conniving between awarders and service providers, the ‘cutback’ from these deals potentially manufacture overnight millionaires without breaking sweat.

If a forensic audit is made of all tenders awarded during the tenure of the Zanu PF government, surely the amounts embezzled runs into trillions. That’s the reason why Mangoma had to be stopped.

Gains of the liberation war or Spoils of War?

It is not difficult to discern who has benefited from the war of liberation. When the mandarins in Zanu PF talk of ‘gains of the liberation war’, what they actually mean is ‘spoils of war’.

It is akin to the medieval times when the conquering army would loot everything that the conquered owned and appropriate to themselves. Zimbabwe and its resources are the spoils for Zanu PF.

The systematic looting of state resources is evidenced in NOCZIM, in the billions that Gono printed and never accounted for, in Chiadzwa, the VIP housing scandal, Willowgate, the collapse of Boka Empire, the looting of the War victim’s compensation fund, and many more.

The sick joke is epitomised by Chombo’s vast wealth as disclosed during his divorce case, were a minister owns land nearly in every town in Zimbabwe. Thanks to Hon Mangoma, we got to know on record how money is siphoned in Zimbabwe.

To those of us in MDC-T, Hon Mangoma represents what exactly we mean by being a party of excellence. Well done Hon Mangoma for not compromising your principles. Zimbabweans know who the criminals are and will speak with their vote come election time.

The writer can be contacted at smakombe@btinternet.com