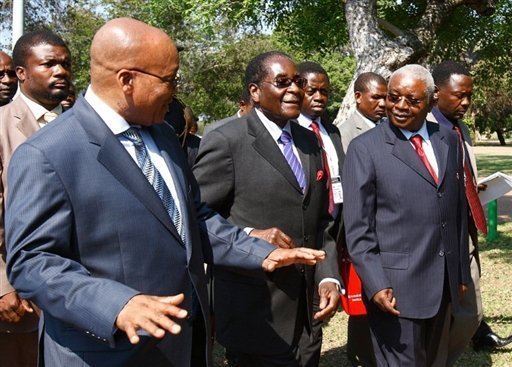 HARARE, April 6 (Reuters) – President Robert Mugabe sought on Wednesday to heal a rift with regional leaders who have helped protect him from outside criticism but recently joined in a chorus calling for an end to political violence in Zimbabwe.

The Southern African Development Community (SADC) has been criticised for being too soft on the 87-year-old Mugabe, but the tone of its leaders has been stiffening as tension rises ahead of possible Zimbabwean elections this year.

At a regional summit this month in Lusaka, the leaders of Zambia, South Africa and Mozambique broke from their typically mild rebukes of Mugabe’s suspected human rights abuses and condemned a recent crackdown on his opponents.

Mugabe’s spokesman George Charamba said the quarrel was over minor points, climbing down from previous statements where his government attacked the regional leaders and told them not to butt into Zimbabwe’s internal affairs.

“Clearly and unambiguously, the anvil of President Mugabe’s address related to procedures and style,” he said in a published article. “Zimbabwe has very little difficulties with the communique itself. In fact, it has no difficulties at all, merely cautionary concerns with one or two of its proposals.”

Political analysts say despite Mugabe’s apparent fallout with South African President Jacob Zuma over last week’s SADC summit, the Zimbabwean leader is keen to retain the traditional political support he has enjoyed in the region.

The SADC has served as a buffer between Zimbabwe and Western governments that have imposed sanctions on the southern African country over widespread suspicions that he has used violence and intimidation to stay in power.

Mugabe, in power since Zimbabwe’s independence from Britain in 1980, is pushing for early elections before agreed democratic reforms. His political rivals have warned that such a vote could lead to a bloodbath and crush a nascent economic recovery in the impoverished, yet resource-rich state.