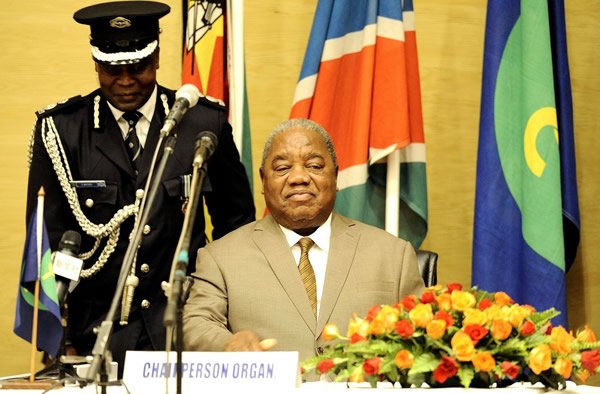 The SADC Troika Summit commenced at 1930hrs at the Zambezi Sun Hotel with the Republic of South Africa’s President Jacob Zuma, President Rupiah Banda of Zambia, President Guebuza of Mozambique  and Namibian President Pohamba in attendance.

“If there is anything that we must learn from the upheavals going on in the northern part of our continent, it is that the legitimate expectations of the citizens of our countries cannot be taken for granted. We must, therefore, continue at the SADC level to consolidate democracy through the establishment of institutions that uphold the tenets of good government, respect for human rights and the rule of law.

“We must also uphold various international laws and conventions under the African Union and the United Nations that we are parties to…I wish, therefore, to call upon the SADC Troika to bring to life mechanisms such as the SADC Electoral Advisory Council, the SADC Mediation Reference Group and the Panel of Elders, whose establishment was approved at the Windhoek Summit in August 2010.”

The SADC Executive Secretary Salomao read out the SADC Troika Summit Communique with the following highlights:

•        The Summit received the report on the political and security situation in Zimbabwe as presented by the SADC Facilitator His Excellency, Jacob Zuma.

•        The Summit also appreciated the frankness with which the report was presented by the SADC Facilitator and commended him for the work that he has been doing on behalf of SADC.

•        The Summit noted with grave concern the polarization of the political environment as characterized by, inter alia, resurgence of violence, arrests and intimidation in Zimbabwe.

In view of the above mentioned, the Summit endorsed the report of the SADC Facilitation on Zimbabwe, and resolved that:

1.       There must be an immediate end to violence, intimidation, hate speech, harassment, and any other form of action that contradicts the spirit of the GPA;

2.       All stakeholders to the GPA should implement all the provisions of the GPA and create a conducive environment for peace, security, and free political activity;

3.       The Inclusive Government in Zimbabwe should complete all the steps necessary for the holding of the elections including the finalization of the constitutional amendment and the referendum;

4.       SADC should assist Zimbabwe to formulate guidelines that will assist in holding an election that will be peaceful, free and fair, in accordance with the SADC Principles and Guidelines Governing Democratic Elections;

5.       The Troika of the Organ shall appoint a team of officials to join the Facilitation Team and work with the Joint Monitoring and Implementation Committee (JOMIC) to ensure monitoring, evaluation and implementation of the GPA.

The Troika shall also develop the Terms of Reference, time frames and provide regular progress report, the first, to be presented during the next SADC Extraordinary Summit. Summit will review progress on the implementation of GPA and take appropriate action.

ON THE IVORY COAST

Summit called on Mr. Laurent Gbagbo to hand over power to the internationally recognized winner of the Ivorian Presidential Elections, Mr. Allassane Ouattara with immediate effect in order to avoid further bloodshed.

Notes prepared by the Crisis in Zimbabwe Coalition