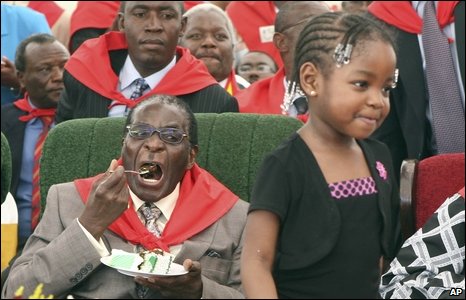 Statement by Reporters Without Borders (http://www.rsf.org)

Robert Mugabe will turn 87 on 21 February. Appointed prime minister in 1980, he stepped up to the presidential throne seven years later. Since then no one has been able to get him to step down. Independent Zimbabwe, the former Southern Rhodesia, has been subject to his dictate for 24 years. And journalists have had to behave themselves!

“The old man,” as he is known in Harare, is expected to celebrate his birthday with the usually pomp. While his people go hungry, he gorges himself. There are few reasons for partying in Zimbabwe. Hyperinflation, food shortages, unemployment, a devastating AIDS epidemic. The time when Zimbabwe was southern Africa’s breadbasket is long gone. No matter. Monday is his birthday. Like a boy, that’s all he can think about right now.

While the state-owned press just talks about the president’s birthday, independent newspapers continue to be gagged. They try to cover human rights issues and the country’s economic and social situation, but they are exposed to serious reprisals.

Repressive legislation, state control of public media, harassment of the privately-owned press, physical attacks on freelance photographers, arbitrary arrests, illegal detention, systematic persecution of human rights activists and heavy-handed interrogation by the Central Intelligence Organization – these are the ingredients of censorship and suppression of free speech in Zimbabwe.

Mugabe is one of the world’s oldest heads of state, on a par with Saudi Arabia’s King Abdullah bin Abdelaziz Al Saud and Singaporean President Sellapan Ramanathan, two other champions of press freedom.

Not everyone is living so comfortably at 87. Take the example of 87-year-old Chinese activist and journalist Sun Shucai. A refugee in Bangkok since November 2006, registered with UNHCR, in possession of a documenting saying he had requested UN protection, he was nonetheless arrested by the Thai authorities last December and has been in an immigration detention centre ever since (http://en.rsf.org/thailand-chinese-dissident-journalist-21-12-2010,39125.html).

Happy Birthday, Mr. Predator. You caused your country to plummet in the press freedom index our organization publishes every year and now it is in the bottom third. Thanks to the money your First Lady makes from diamond trafficking and the fortune you have stolen from the people, no one doubts that your party will be a lavish one. Meanwhile, your people will have to grit their teeth.