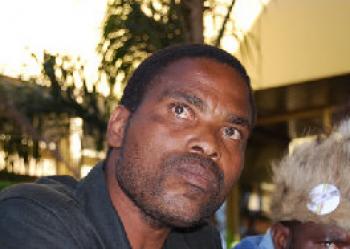 Six members of parliament from the MDC led by Prime Minister Morgan Tsvangirai were dragged to court on allegations of disrupting a meeting that was being addressed by notorious war vets leader, Jabulani Sibanda.

They are facing charges of ordering villagers at Makotore Business Centre in Bikita to disperse from Sibanda’s forced meeting.

The MDC said they found it ridiculous “that instead of arresting Sibanda who has been issuing threats, persecution and using hate language at his illicit rallies in Masvingo, the police have decided to summon the popularly and democratically elected MPs.”

“Sibanda and his rag tag team continue to force villagers in Masvingo province to attend his rallies where he threatens them with death if they do not tag along the discredited Zanu PF agenda,” a party statement said.

Jabulani Sibanda to bounce back?

In the same province last year constitutional outreach meetings were suspended after Sibanda addressed a rally at Mashoko Business Centre in Bikita West and threatened villagers with violence if they voted against Zanu PF constitutional positions.

After Sibanda’s threats, the homestead of MDC Bikita West district Youth chairperson, David Hollman, was burnt down in an arson attack.  Sibanda was not arrested for causing these disturbances.

“It is therefore shocking that democratically elected MPs are being brought before the courts for calling the removal of Sibanda from Masvingo province as he was inciting unnecessary violence.

The political violence that took place in 2008 after the defeat of Zanu PF at the polls by the MDC are still fresh in the people’s minds and the MPs were trying to bring sanity in Masvingo following threats of a return to violence by Sibanda,” the MDC said.

Jabulani Sibanda to bounce back?