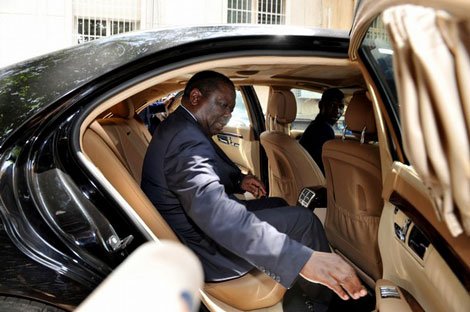 Two of Prime Minister Morgan Tsvangirai’s drivers, Clifford Sanyika and Joshua Mhuriyengwe, were on Saturday arrested at the Beitbridge border post on an innocuous charge after they were found with siren beacons for the head of government’s two Toyota Prado vehicles.

The two appeared before a Beitbridge court today charged with contravening Section 29(3) of Statutory Instrument 154 of 2007 – driving with a beacon. The accused persons say that the beacon light was on the passenger seat, and not fixed or attached to the car.

Their lawyer has applied for bail, which was opposed by the State on the grounds that the accused persons are a security threat. The Magistrate will give his ruling tomorrow morning. The drivers were coming in from South Africa where the vehicles had undergone a routine upgrading of the siren and security systems.

That official drivers of the Prime Minister could be harassed and detained and that the official vehicles of the Head of Government can be impounded is a clear signal of the continued persecution of the person and office of the Right Hon. Morgan Tsvangirai.

The State argued in court today that the two drivers could not be granted bail because the equipment was a threat to state security. God knows how two drivers attested into the civil service and driving the Prime Minister’s vehicles with sirens and beacons can ever be said to constitute a security threat to the country.

In the run-up to the June 2008 event, the Prime Minister’s campaign vehicles were needlessly impounded and three years later, one of them remains impounded at Lupane police station. The arrest of the PM’s drivers and the impounding of his vehicles represent cheap political drama that is meant to embarrass his person and his office.

Last week, the Minister of State security, Sydney Sekeramayi, made an undertaking that the vehicles would not be impounded but would instead be brought to Harare while the so-called case was being sorted out. The next thing was that the drivers were arrested and the vehicles impounded without any further explanation from the same office.

The only explanation for this political gimmick is that it fits in well with the perennial scheme by State security agents to persecute the Prime Minister.  This needless harassment does not bode well for the inclusive government and makes the people lose confidence and faith in some of the national institutions that are supposed to serve and protect the people.

If State institutions have no respect for the Prime Minister, it can only be worse for ordinary Zimbabweans seeking security and protection from the same national institutions.

The two groups of slaves in Zimbabwe