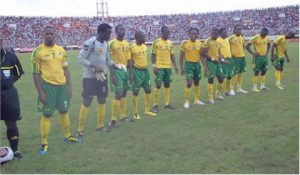 Debutants Niger beat Zimbabwe 1-0 in the opening match of the African Nations Championship (CHAN) in Sudan on Saturday. A 70th minute effort by midfielder Adamou Abdoulkader was enough for a history making victory.

Despite the Warriors coached by Madinda Ndlovu dominating the match in Group B, Niger somehow secured the victory in their first ever game at a major continental club championship.

Eric Mudzingwa and Joel Ngodzo both hit the post for Zimbabwe while Clive Kawinga was twice denied by the Niger goalkeeper. The result leaves the Warriors bottom of Group B with South Africa – who dismissed Ghana 2-1 – sharing top spot with Niger.

Zimbabwe plays Ghana on Wednesday before meeting neighbours South Africa next Sunday. The CHAN tournament is restricted to players plying their trade in their home countries.

Kuruneri SA mansion up for auction