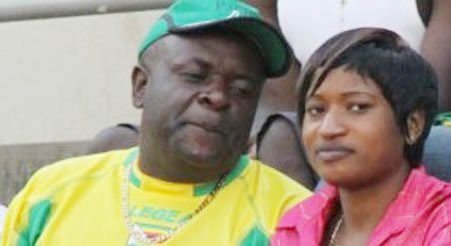 Newly appointed board chairman of the Dancers Association of Zimbabwe, Paddington Japajapa has proved to be a hunk in demand from the fairer sex if revelations in the hands of H-Metro are anything to go by!

This follows a fierce fist fight between two female dancers who are alleged to be his sparring girlfriends. They fought for hegemony over Japajapa in a typical “the boy is mine” fashion.

The incident occurred in Tatenda Street, Dzivarasekwa 3 last week. The two dancers were identified as Jestina Chimbizi and (the other one could only be identified by her stage name) Maskiri.  They are both members of Unique Dance Group which is sponsored by Japajapa.

Dancers awards on next month

Japajapa was getting ‘fringe benefits’ for his generosity, so it seems from the two’s sparring! The black empowerment activist decided to empower himself with some ‘unique’ girls! Impeccable sources told H-Metro that Jestina is Japajapa’s official mistress and she caught wind that her colleague Maskiri also ‘had an interest’ in her man Japajapa.

She heard that the two were spotted at a city lodge doing God knows what, and she became livid. “When Jestina heard about Japajapa being sighted with Maskiri, she ganged up with two other group members identified as Sophia and Mary and heavily assaulted Maskiri. “She was badly injured,” revealed the source.

Eyewitnesses told H-Metro that Jestina hit Maskiri with broken glass and she was left with a bruised face. She is also alleged to have ‘stolen’ Maskiri’s mealie-meal, which was allegedly bought by Japajapa in a scenario reminiscent of the food for sex scandals committed by soldiers in war torn Somalia. “Jestina and crew took all the food that they claimed Japajapa had bought.

“They took mealie meal and rice,” revealed the source who was present as the melee unfolded. Japajapa was not present when the drama unfolded. But the black empowerment mogul says the tiff was based on uninformed rumours and nothing else.

“I sponsor that group and during a misunderstanding one may have just hinted that the other was behaving waywardly as if they are in love with the boss (Japajapa) and hence the rumour that I am in a relationship with one of them. Nothing could be further from the truth,” said Japajapa in his defence.

“This is just something that typically happens with dance groups and where two young dance group ladies spar,” added Japajapa. Maskiri is said to have fled to Karoi in fear of more harm from Jestina and she is said to have changed her phone number to avoid stalkers.

The matter was reported to the Dance Group Association of Zimbabwe (DAZ) and this was confirmed by officials from the organisation. They however, spoke on condition of anonymity fearing reprisal from their boss.

“Yes we have received a complaint to that effect but I don’t have finer details. “I just heard sketchy details,” said the official. H-Metro then contacted Japajapa, not in his capacity as the board chairman of DAZ, but as the “accused”.

He confirmed that INDEED there was a fight between members of his dance group Unique, but he denied being involved in any relationship with any of the girls in the group. “I knew that this sponsoring of dance groups will get people cooking up stories against me.

“The truth is that the girls were fighting because of their own misunderstandings, there was a rumour that circulated alleging that I was playing Jestina and Maskiri and this was the cause of the fight. “But the fact is I don’t date these girls, I am just trying to promote the arts.

“In fact I offered to help Maskiri with her medical bills but I hear she has left town,” said Japajapa who vehemently denied any ‘workplace romance’ with the Unique Dance group members. However, at the launch of DAZ in October last year, H-Metro witnessed Japajapa confronting a local journalist and barred him from talking to Jestina.

But with the latest allegations, if they are to be believed at all, it seems Japajapa may have been protecting his own amorous interests as it were! However, Jestina admitted that she had a fling with her benefactor! When H-Metro first phoned her she confirmed that she had walloped Maskiri and she referred the reporter to Japajapa.

“Yes, I beat her up, but what does that have to do with you. “Anyway, phone Japajapa he is the one who can tell you why we fought,” she said. On the second call, she cut the phone and sent a text message advising H-Metro that she could not discuss the matter because Japajapa was present.

The message read: “texta, ndinaye hazviite kuti nditaure aripo, (please text me I am with him now (Japajapa) I can’t talk).” She then phoned H-Metro and when asked whether she was dating Japajapa she said yes.

“Ehe, kasi ndati mira ndichazokubhipa wondifonera tonyatsotaura (Yes we are dating but wait, I will beep you and you call me so that we can discuss the issue),” said Jestina. She stuck to her man even in times of trouble! H Metro

We surprised ourselves says Under 23 captain

Dancers awards on next month