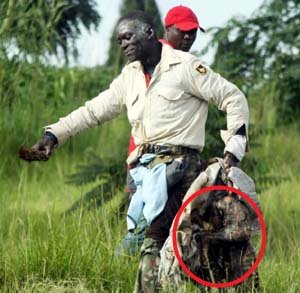 A suspected mentally-challenged soldier caused a stir in Braeside, Harare when he was spotted dragging the carcass of a decomposing dog. Clad in military uniform, the man also brought traffic to a halt at the corner of Airport Road and Glenara Avenue as motorists, vendors and onlookers jostled to catch a glimpse of the suspected mad soldier.

The man, believed to be in his early 30s, was unmoved by the smell of the carcass and one wonders where he was taking it to. Others speculated that he was craving for dog meat as his relish. Spirited efforts by H-Metro to interview the man were fruitless as he became violent threatening to assault this photojournalist.

“You will die my friend get away now, I mean now,” said the enraged soldier. Removal of dead animals from the streets is taking long resulting in mentally challenged people being exposed to diseases.

Last year, a mentally challenged woman was spotted in Houghton Park feeding her baby with the meat of a decomposed dog. H Metro

Mawere does not own SMM claims Chinamasa