Last week the majority of progressive Zimbabweans prematurely celebrated the attempted closure of the Zanu PF mouthpiece The Zimbabwe Guardian also known as Talk Zimbabwe. A visit to the website had the following message;

Important notice to all our readers

We would like to thank you for all for your support over the four years we have been publishing. We regret to inform you that The Zimbabwe Guardian will no longer be publishing effective immediately. Developments in the past few months have made it impossible for us to continue publishing.

The message went further to say ‘while we understand that this may come as a shock to our readers, we believe that we have made a vital contribution since we started and it is time to move on to other ventures.’ The message was dated 3 December 2010.

Lloyd Msipa: Why Emmerson Mnangagwa is an illegitimate…

Lloyd Msipa: Marry Chiwenga, the questions we are not asking 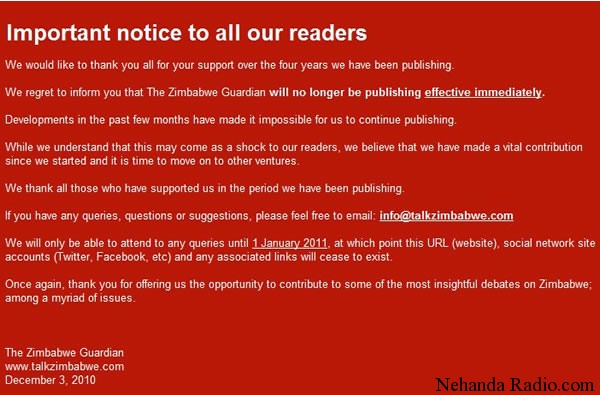 Within days the red banner had been removed and a new blue banner claimed that in light of the WikiLeaks exposures it had become necessary for them to come back and publish more of the same Zanu PF propaganda they have been churning out.

The website was set up by then UK based Itayi Garande (pictured) who at one time projected himself as a progressive academic interested in the general welfare of ordinary Zimbabweans. First time this author heard of him was as a guest on SW Radio Africa’s Reporters Forum series hosted by Lance Guma.

When Mugabe lost the elections in March 2008 Garande flipped from a neutral academic to a sycophantic apologist. He was roped into the Zanu PF PR machinery and his Zimbabwe Guardian technically became an extension of the state owned Herald newspaper based of course in the Diaspora. All its stories are drawn from the Herald and some of their Diaspora stories are in turn used by the Herald, so you can see the relationship.

Towards the end of 2008 there was increasing pressure from activists for Garande to be deported from the UK because his website was supporting a regime whose officials where on European Union targeted sanctions. Feeling this pressure Garande stage managed his exit from the website.

In an article titled “Politics is never what it seems to be” Garande writes, “as I sit in a comfortable sunny place in Southern Africa, a few days before returning to the place I have called “home” for the last 16 years, I feel it is an opportune time to pen my last piece as the Editor of the Zimbabwean Guardian.’

To say Garande is no longer involved in the website is to be allergic to the truth. It is believed by many he has simply taken a back seat in terms of using his real name but writes articles using the pseudonyms Nancy Lovedale, Susan Nyadire, Sihle Dube and Tendai Midzi.

Tendai Midzi for example is said to write from the UK and is claimed to be a senior lecturer in economics at the London Metropolitan University. When the Zimbabwe Independent made inquires some months ago, the university said they had no such person on their books.

That’s what lying does. It catches up with you soon. The website has since dropped that bogus description and now simply says Tendai Midzi writes from the UK. He can be contacted via [email protected].

So why is Itayi Garande debating whether to continue running the website or as he says ‘it is time to move on to other ventures.’ When you support the regime, money and opportunities to make money are the ultimate benefit and motivation.

I hear Garande and a few partners who include ZAPU official Lloyd Msipa were given a licence to run a cargo freight airline between Zimbabwe and South Africa using leased aircraft. That is how you make money in Zimbabwe folks. Lick a brutal regime in the butt and smile all the way to the bank.

Lloyd Msipa: Why Emmerson Mnangagwa is an illegitimate president

Lloyd Msipa: Marry Chiwenga, the questions we are not asking