Kasi kept calling Ivy even on our honeymoon 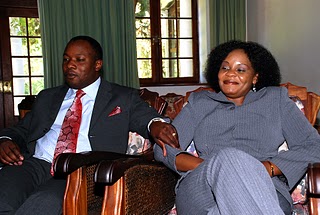 Reverend Edmore Moyo, the ex-husband of disgraced gospel singer Ivy Kombo, speaks exclusively to Nehanda Radio about how his marriage was destroyed by Pastor Admire Kasi, the man who as foster father looked after the orphaned Ivy and her twin sister Anne Kombo since they were eight years old (although some say 13 years). (see intro article)

Moyo was an engineering student at the Harare Polytechnic before he moved to the University of Zimbabwe’s Bishop Gaul Seminary for Anglican priests and trained in Theology. He married Ivy Kombo in December 2001. The problems emerged early on with Kasi said to call Ivy ‘too much’ on the phone even for a foster dad.

Moyo told us many people in the Zimbabwe Assemblies of God Africa (ZAOGA) church they used to attend kept warning him saying ‘Ivy mukadzi wa Kasi- Ivy is Kasi’s wife.’ In hindsight Moyo told us it meant people in the church knew what was going on behind his back and that of Kasi’s long suffering wife Sarah.

When they got married Moyo told us the honeymoon was a nightmare made in hell with Pastor Kasi calling Ivy now and then. He challenged Ivy on why she was taking so many calls from the supposed ‘foster dad’ especially on their honeymoon. A heated argument broke out with Ivy telling Moyo he was jealous.

Tomorrow we continue the series and tell you how Pastor Kasi using his financial resources moved in for the kill and put pressure on the young couple by changing Ivy’s work schedule and engineering a move for Moyo to take up a ministry in the United Kingdom.[ad]