Sunderland not looking to bring back Benjani 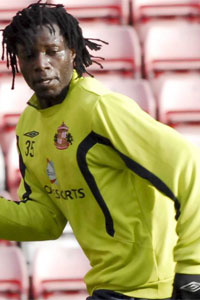 SUNDERLAND will not seek to bring Benjani back to Wearside if, as expected, he is released by Manchester City this summer. The Zimbabwe international striker spent the second half of the season on loan with the Black Cats, but played only a cameo role in his time at Sunderland.

Benjani returned to Eastlands at the end of the campaign, but his contract with City expires this summer and boss Roberto Mancini is understood to have decided against offering him a new deal. That would mean the frontman – who turns 32 on the eve of the new season – will be able to leave for nothing, two-and-a-half years after City paid almost £4m to sign him from Portsmouth.

Benjani’s Premier League experience will help him find a new club in England, but Sunderland will not be among the potential suitors after he made just one start and seven substitute appearances in his time on Wearside, totaling only 121 minutes of action. Nevertheless, the pay-as-you-play loan deal agreed between Sunderland and City kept the cost to a minimum for the Black Cats.

Sunderland only paid the frontman’s estimated £50,000-per-week wages when he played, with City picking up the bill when he was not in action. And while Benjani made little impact on the pitch in his largely brief appearances for Sunderland, he did perform a valuable dual-role for the club.

With Sunderland in the grip of an injury crisis just after Christmas, boss Steve Bruce recruited him primarily as cover for top-scorer Darren Bent, Kenwyne Jones and Fraizer Campbell. And the additional competition for places he provided also kept Sunderland’s strikeforce on their toes – with Jones in particular upping his game in the weeks after Benjani arrived.

Harry Redknapp recounts how he forced Benjani to join…

‘I’m not Benjani, but Mpenjani’

Bruce admitted: “Benjani was a good signing for us at the time because we needed cover in case of injuries. “In the end, he didn’t play many games, but the extra competition for places brought the best out of the other lads.” Chronicle Live.co.uk

‘I’m not Benjani, but Mpenjani’

Benjani hailed by fans for celebration in Vincent Kompany testimonial